The Walking Dead Season 5 Spoilers & Discussion: Who is the Most Complex Character? 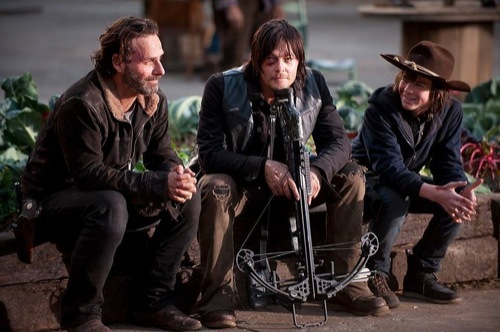 The Walking Dead season 5 is shaping up to be a super thrill ride. We love all the characters, but who is the most complex? We’ve seen plenty of characters come and go over the last four seasons of The Walking Dead. With such an assortment and collection of characters, some of them show great depth and some show little. Check out our thoughts below and don’t forget to return to CDL for all your TWD spoilers, previews, and recaps.

Rick –  Rick is certainly complex. We have watched him morph and evolve as he has undergone traumatic experiences. At the base of his character, though, we have a sense that Rick knows what is right and wrong and chooses to do what is right.

In season five’s premiere, “No Sanctuary,” though, other members of the group are shocked when Rick orders them to kill any human escaping from Terminus? Who is this Rick?

We’ve seen Rick suffer breakdowns and have lapses in reality. We’ve watched him throw aside his leadership then take it back up. The complexities of Rick Grimes are certainly surprising and keep us guessing.

Daryl – Who would have thought Daryl Dixon would become so interesting? I certainly didn’t during season one. I thought he was a worthless thug, but that just goes to show you can’t judge someone. Ever.

Daryl has stepped up to become one of the leaders of this ragtag group and we respect him for that. He may be redneck rough around the edges, but we love him for it. He has a soft side that we so enjoy seeing. Season two started showing bits of Daryl that we didn’t expect and like an onion, his layers started to be peeled away.

What is it about Daryl that attracts people? Perhaps it is that unknown about him. Perhaps it is the surprising elements that we don’t expect. When he ran to Carol at the end of “No Sanctuary” and was actually crying, THAT showed us that he is worthy of our respect and love.

Carol – Wow, has Carol ever been an evolving character. She has changed so much since we first met her in season one. Don’t we love this new Carol? She’s tough, she’s gritty, she does whatever necessary to protect her loved ones.

Carol is quite complex and has many sides that remains to be seen. I believe season five will bring her to the forefront as a strong character who is very important to our survivor group. It’s going to be fun watching what Carol does.

Tyreese – Be watching Tyreese. I think season four has made us underestimate him. I think he has some serious toughness and leadership qualities that will be brought out. We don’t know much about Tyreese, but I think it’s safe to expect a great deal from this quiet warrior. Be watching!

These characters all show great complexities of their personality, skills, strengths, and weaknesses. They are worth watching and paying attention to as season five progresses. It will be interesting to see what happens.