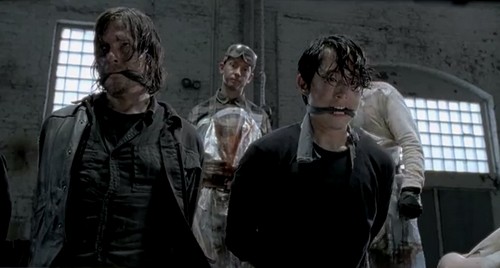 The Walking Dead‘s season 5 spoilers trailer just released, and it’s full of zombies and drama, just as we expected.

The group is back together, and headed for Washington. And to think, we actually thought that they might not all reunite at Terminus! However, there’s an interesting twist of the villain/savior theme in this trailer, where Gabriel becomes a sort-of good guy? Well, he at least gets convinced that taking Abraham and co to Washington is a good idea, and so everyone gets back on the road. And Rick [Andrew Lincoln] is with Judith again, which means that Carol and Tyreese managed to find their way to them! Again, not surprising.

However The Walking Dead spoilers show a dude swinging a bat at Glenn [Steven Yeun], which could be meant to emulate the famous scene in the comics where Glenn dies at the hand of big baddie Negan? I’m guessing not, because we see Glenn in later scenes outside of Terminus. However, whether he gets injured or not, it’s definitely a sly nod from the showrunners.

There’s also a lot of focus on Rick and Carl, as per usual, with Rick telling Carl [Chandler Riggs] that he’s never safe, no matter what people tell him. Oh, that Rick, always the debbie downer in every situation.

At the end of the trailer, we get a quick glimpse of Beth, who seems to be with another group entirely. However, poor Beth is clearly not in friendly company, because the woman she’s with bashes her on the head before the trailer cuts to black.

All in all, plenty of zombie and human action, but it’ll be interesting to see how long it takes for the whole group to reunite this season on The Walking Dead and actually get to Washington.