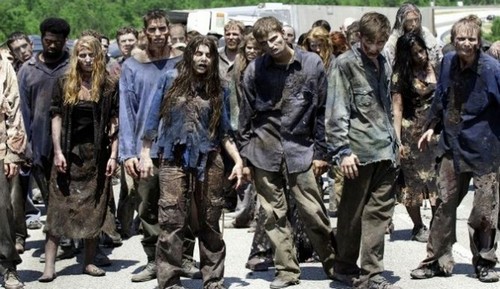 How Did it Start? There has been little information given during the five seasons of The Walking Dead about what actually started the zombie outbreak. Was it a bio-attack from terrorists? Was it a governmental experiment gone wrong? Hopefully a spin-off will answer the question about exactly what caused it to happen.

It Happened Quickly: One thing that we know for certain is that the zombie virus spread quickly and the apocalypse happened in a short amount of time. We know this due to Rick’s hospitalization in season one. Only a few clues are given about the time lapse from Rick’s shooting until he wakes up in the hospital.

When he was shot, he was clean shaven, but when he awakes, he has a decent beard going. We also saw a bouquet of flowers wilt, die and dry. All of this would indicate at least two weeks to a month.

We know from watching the series that even one walker can cause chaos, so it would stand to reason that things moved very fast. Rick was very weak when he woke up, which would indicate that he was probably hungry and somewhat dehydrated. A human can’t go long without fluids, so a guess of two weeks to one month would be reasonable.

It Spread Across the Country: If the spin-off series Cobalt is taking place on the West Coast, and The Walking Dead series takes place in Georgia, it’s obvious that the zombie virus spread across the country. It is uncertain if the Los Angeles setting for the prequel indicates that it started on the West Coast and spread eastward, but that would be a reasonable assumption.

Massive Infection: A visit to the CDC headquarters in Atlanta gave Rick the information that that every person was infected by the virus. Prior to that (which we were not privy to until season 2), we all assumed that the only way for infection to occur was from a walker bite. With Shane’s death in season 2, it was confirmed that everyone was infected and would reanimate if they died. This indicates massive infection on a grand scale. Bio-terrorism? That would certainly be a good explanation.

What actually caused the zombie apocalypse? Our survivors on The Walking Dead are more concerned with staying alive, but perhaps the new spin-off series will give us insight about what happened to bring about the end of the world as we know it. Check back tomorrow for more The Walking Dead season 5 second-half spoilers.