BY Jessica McCain on May 10, 2014 | Comments: Leave Comments
Related : Recap, Review, Soap Opera, Television, The Young and the Restless 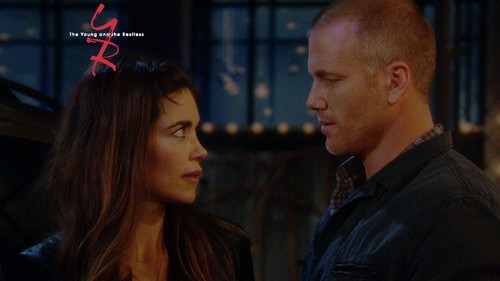 The Young and the Restless weekly review and recap – week of May 5-9 follows. As a special feature we explore Eric Braeden’s attack on a Michael Muhney fan, click here.

Monday – Chelsea is still giving Chloe the third degree about her soon to be pregnancy. Chelsea also is curious to know if Chloe is going to tell Kevin. Chloe can’t understand why Chelsea isn’t all go go gadget about this. Elsewhere Ian is about to call the police on Dylan. They argue and throw insults back and forth. Finally Ian has enough and picks up the phone to to carry out his threat. Dylan thinks Is trying to get to Avery and threatens to rip him up if he does.

Stitch ask Victoria if she is still sick. Victoria laughs if off and when Stitch asks her out she says yes.

Kelly and Jack are sucking face in the park. Jack feels they should find somewhere less family friendly.

Avery’s show gets interrupted with a knock at her door. Leslie tells Avery they need to talk immediately. Leslie is upset that Dylan is bothering Ian. Avery gets upset because Leslie is buying into Ian’s crap.

Billy is doing a online search for a Dr. Rayburn. There isn’t a record on him of any kind. an online search on Dr. Ben Rayburn. When Victoria returns Billy goes back to spending time with Johnny. Billy brings up Stitch. Victoria shuts him down.

Ian is egging Dylan on by talking about his parents, Avery and everything in between. Much to Dylan’s misfortune Paul shows up right when he grabs Ian.

At the bar Chloe finds Billy getting trashed. Chloe advises him not to get wasted and that she will take him home. Billy has one last drink.

Summer finds out Jack is seeing Kelly and gets upset about it.

Leslie and Avery are still going at it when Ian calls to tell Avery about Dylan being arrested.

Avery and Leslie show up at the station. Avery tells Dylan he did just what Ian wanted him to. Ian informs them he won’t press charges.

Billy thinks Chloe is Victoria and she goes right along with it.

Tuesday – Chelsea knows that Victoria doesn’t know who her baby’s daddy is. Victoria tells her she has to keep it to herself. When Stitch arrives Chelsea leaves and then Victoria cancels their date.

Summer is making Jack feel like crap for going behind Phyllis’s back. Jack is do upset that he tells Kelly they can’t be together. After Jack takes off. Kelly cries.

Chloe strips down and jumps on bed with a now passed out Billy. Chloe gets dressed and leaves. When Jill shows up later she wakes Billy up. Apparently he butt dialed her. Billy tells Jill to tell him to get out. Jill isn’t going to do that, but Jill does come up with a way to make him pay.

Victoria opens her door. Stitch is there. Victoria tells him she isn’t ready for a relationship. Stitch tells Victoria he will give her time and space.

Summer is explaining to Noah that Jack is getting it on with Kelly. Summer thinks Jack gave up on Phyllis. Noah disagrees.

Chelsea ignores Chloe. Billy calls Chloe to thank her for getting him back home. Chloe assures him she will find a way for him to pay her back.

Billy answers the door and Chelsea is there.

Wednesday – Nick and Sharon talking and she again brings up her secret. Nick tells her of she doesn’t let it go then Victor will win. Mariah happens by Sharon calls her Cassie and heads off after her. Sharon tells her she knows that Phyllis also knows her secret. Sharon decides she wants to talk to Mariah alone. Mariah ask her why she just doesn’t ask Phyllis. Sharon tells her She would but Phyllis is in a coma and the last time I checked in Port Charles going by the name Nina. Mariah leaves and when Nick comes back she tells him she wants go undergo hypnotherapy.

Victor wants to talk to Nikki in private. Victor wants her to come back home. They argue about nick and Sharon. When Victor leaves Nikki’s illness starts to bother her.

Jill informs Colin his surprise has to do with cold hard cash. Jill finally figured out the music box. Jill tells a whopper to Colin. At first Colin doesn’t believe her but then he decides a little money wouldn’t hurt. Jill tells him he has to find the ashes of the dog. Later she locks him the bathroom.

Victoria is daydreaming about telling Billy about the baby but then remembers it might not be his, her doorbell rings and Abby is there. Abby starts telling her about Tyler and Mariah. Victoria gets emotional and ask her if they can do this another time.

Chelsea is telling Billy she thinks she can help him with Victoria. Billy doesn’t want her help and tries to get rid of her. Abby shows up next and tells him about Victoria crying.

Thursday – Avery’s is arguing with Dylan when Austin shows up to finish yesterday’s show. Avery keeps messing up and decides to quit the show. When she makes a call yo inform them of her decision she finds out she is going to be on the talk.

Nikki calls to make appointment with her doctor. Nikki runs into Ian who is more than happy to tell her about Dylan’s arrest. Dr. Costner.

Stitch is wishing his son a happy birthday by video. Victoria shows up. She ask about his son and shot it’s like to be away from him. Stitch tells her a out being in Afghanistan. When Dylan shows up he tells stitch he needs to open up to Victoria.

Jill is discussing Billy’s marriage with him. He hears Colin upstairs banging on the door upstairs. Billy leaves. Jill goes upstairs and tells him he accidentally but dialed her ankle he was chatting up his loan shark. Jill chloroforms him. When Colin wakes up Jill wants him to sign divorce papers. He refuses. Besides it’s kind of hard to do when hour tied up.

Victoria goes to see her OB and ask now soon a paternity test can be done. Victoria finds out she has go be 14 weeks.

Victor is getting into it with Ian. Ian tells Victor he saw Nikki on her way out the door for a doctors appointment. Victor threatens Ian who leaves shortly after. Victor calls Nikki’s doctor and finds out she needs to remain stress free.

Stitch sees Victoria at the hospital again. After she leaves Stitch figures out she was seeing her OB.

Friday – Lily is asking Kelly about her night of debauchery. Kelly tells her Jack left be gore anything happened. Lily thinks Kelly needs to find someone else. Kelly disagrees.

Over at Jabot Jack is having thought of Kelly dancing in his head. Hilary ask yo leave early and Jack tells her she can. Summer shows up and tells him even though she doesn’t approve he won’t stand in the way of him seeing Kelly. Jack tells Summer no matter what if and when Phyllis wakes up he will be there.

Abby wants Leslie to tell her everything about Mariah. Abby clues Leslie into the Mariah/Victor connection. Leslie can’t believe what Mariah did this time. Abby wants go know about the other time. Tyler appears and Leslie suggest he tell Abby then Leslie leaves. When Tyler won’t tell Abby they get in a huge fight.

Sharon tells Nick she is all about the hypnotherapy and assures him her secret is going to be found out today. The doctor comes in and warns Sharon of the risk. Sharon knows it might be dangerous but she still wants to try it for her and Nick’s sake. The doctor agrees to do it while Nick stays in the room. Sharon remembers the secret but says Nick can’t know.

Neil and Hilary meet up and he thinks she tricked him into it. Hilary informs Neil she almost let the cat out of the bag earlier with Jack. Lily overhears and ask what it’s all about. Jack comes in and after getting the cold shoulder from Kelly he tells Neil, Hilary, and lily he wants to put on another fashion at the club in a few months. He thinks she faked a business meeting to get him there. She says it’s real and tells him she nearly blurted their secret to Jack. Lily appears and wonders what she doesn’t want anyone to know. At the bar, Cane tells Devon he thinks he wants Hilary. Jack arrives and Kelly blows past him. He joins Hilary, Lily, and Neil. Hilary says Jack has a surprise announcement. Jack tells them he wants to do another fashion show at the club in a couple of months. Jack tells Kelly he wants another chance.