BY Amanda Austin on May 6, 2014 | Comments: 5 comments
Related : Soap Opera, Spoiler, Television, The Young and the Restless 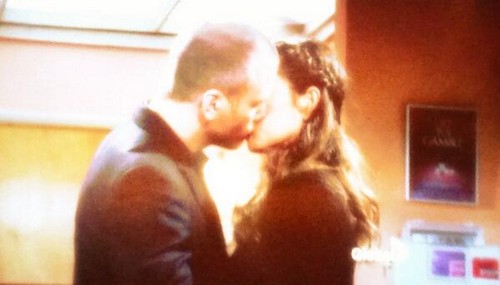 The Young and the Restless’s Victoria Newman has found in herself in a precarious situation. It has been confirmed by a doctor that Victoria is very much pregnant, the real question at hand is obviously – who is the father? When Victoria and Billy Abbott were supposed to be working on their marriage they slept together one last time before calling it quits. A suddenly single Victoria went out the next night and had a minor drunken lapse of judgment and slept with Stitch in the backseat of her car. It’s anyone guess whether Stitch or Billy is the baby-daddy-to-be.

Victoria Newman’s pregnancy predicament isn’t your typical soap opera story though, there is a lot at stake. Billy and Stitch both would be delighted to learn they had a bun in the oven. Billy is still the grieving the loss of his daughter Delia, who was murdered by a hit and run driver (allegedly Adam Newman). A new baby would fill the void in his life that he currently has since losing his daughter. Stitch is also desperate for a family, he has a child with his estranged ex-wife Jenna, however she won’t allow Stitch to be a part of their child’s life.

Stitch has a dark secret he has been harboring since he arrived in Genoa City, and Billy is determined to expose it. The secret is somehow related to Billy’s ex-mistress Kelly, and some Y&R fans are speculating that Stitch may be the driver that killed Kelly’s son before she arrived in Genoa City. How insane would it be if the baby turned out to be Stitch’s? Victoria could be pregnant by a man that killed Kelly’s son!

To add more complication to the situation, Chloe (Delia’s mother) is determined to replace her daughter and The Young and the Restless spoilers tease that on Monday May 5 she will attempt to rape Billy so that she becomes pregnant. If Victoria is pregnant with Billy’s child and Chloe’s plan goes off without a hitch, he could have two babies on the way!

What do you think about Victoria’s pregnancy predicament? Do you hope that Stitch is the father or Billy? Let us know what you think in the comments below, and make sure you check CDL tomorrow for more of our The Young and the Restless spoilers and speculation.

Comments on the nature of Stitch’s bad secret and it being that he killed Kelly’s son follow – right now that theory is looking rather far-fetched:

To bad so many stopped watching…..because who cares. Done with it,gone….

Well whatever is haunting Stitch it’s nothing nice – and it will be exposed!