The Young and the Restless Spoilers: Adam Newman Appears At Connor’s Birthday Party Disguised as a Clown? 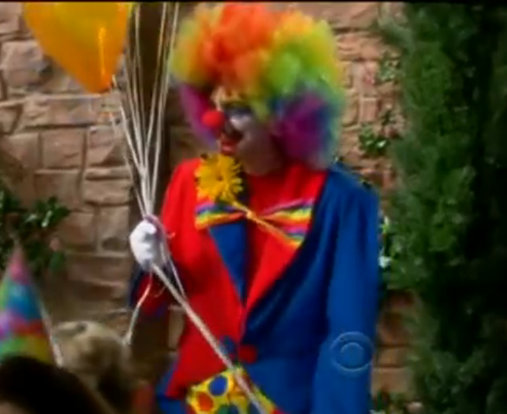 The Young and the Restless spoilers have been teasing Adam Newman’s return for months now. Y&R fans have seen multiple scenes of the character’s infamous hands as he watches his wife Chelsea and son Connor from afar. It’s no secret that TPTB at The Young and the Restless are having a serious problem finding a Michael Muhney replacement, so they really have no choice but to just show shots of the character’s hands and back.

The Young and the Restless spoilers for the week of August 11th tease Adam’s son Connor’s birthday party will take place, and Adam Newman even sends his son a birthday present. Chelsea has no idea that her husband is alive and watching her canoodle with Billy Abbott, and she thinks the gift is from Connor’s grandfather Victor Newman.

According to The Young and the Restless spoilers, there is a rumor going around the internet that Adam will attend his son’s birthday party, but will be disguised as a clown.  CDL has confirmed this though our exclusive source. Chelsea, Billy, and the other attendees have no idea that the clown in attendance is actually Adam Newman getting as close to his son on his birthday as he possibly can without revealing that he is still alive.

The August 18th edition of Soap Opera Digest supports the theory that Adam arrives as a clown. Y&R head writer Jean Passanante discussed Connor’s birthday party in an article in the magazine. Passanante hinted to SOD that a surprise is looming, and said “Maybe Chelsea should worry about that clown!”

So Y&R fans, you should definitely keep an eye on any clowns that show up at Connor’s birthday party, because it sounds like it might be Adam Newman hiding under the big red nose and horrible wig! Do you think that TPTB have finally found a Michael Muhney replacement, or they are hiding the character behind a clown costume because they are still desperately searching for a new actor? Let us know what you think in the comments below and don’t forget to check CDL for all of you’re the Young and the Restless spoilers.