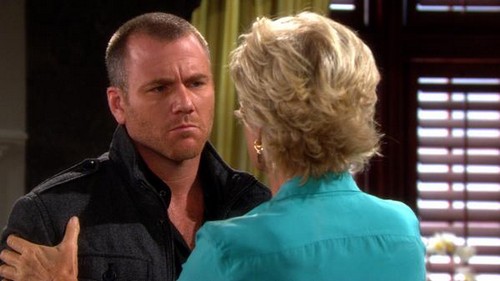 The Young and the Restless spoilers for Thursday October 30 reveal that the CBS soap is borrowing a page out of General Hospital’s playbook, and will also be having a Halloween wedding. According to Y&R rumors, Nick and Sharon’s Halloween wedding will be an eventful one. On the October 30 episode of the CBS soap Nick Newman begins to have second thoughts about marrying Sharon, but she convinces him that it is the right thing to do and she wants to go through with their “I Do’s.”

The Young and the Restless spoilers have been teasing Stitch’s secret about his father’s murder for quite a while now, and Victoria Newman is convinced there is more to the story than Stitch originally confessed. During the October 30 episode of Y&R, Victoria hounds Stitch’s mother Maureen for information, and when she doesn’t come through – she reaches out to her mother Nikki for news. Meanwhile, out of town Stitch and Ashley have a long talk, and Ashley is sure that Stitch is covering for someone else and had nothing to do with his father’s death.

Since Avery’s ex Joe Clark arrived in Genoa City, Y&R spoilers and rumors teased that he was up to no good and planned to make Dylan’s life a living hell. It looks like those spoilers were actually spot on. During the October 30 episode of The Young and the Restless, Joe moves forward with his real estate deal to purchase the building where Dylan’s coffee shop is located, and Dylan receives news from his landlord that he is selling the building and he has two months to clear out.

So Y&R fans, do you think that Nick and Sharon will actually get married this time, or will Phyllis stop the ceremony once again? Who do you think Stitch has been lying for and protecting, his mother Maureen or sister Kelly? Do you see the chemistry between Ashley and Stitch that we have been picking up on? Let us know what you think in the comments below and don’t forget to check CDL tomorrow for more The Young and the Restless spoilers.