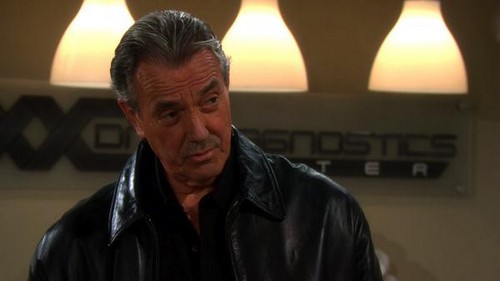 The Young and the Restless spoilers for October 13-17 reveal a week of unsurpassed drama in Genoa City that Y&R fans will not want to miss. One couple shares an unexpected kiss, while another couple questions their relationship. Jack’s complicated love life continues to get more complicated, and the residents of Genoa City gather around for a sad day.

Monday October 13: The Young and the Restless spoilers reveal that on October 13 Phyllis proposes to Jack, and he retrieves her ring from the pawn shop. Things get complicated when Jack’s other fiancé Kelly spots the engagement ring on his desk. Meanwhile, Bill and Chelsea argue about their relationship and whether they will ever be able to let go of their exes Adam Newman and Victoria. Stitch and Victoria share an interesting moment when Victoria surprises him with a kiss.

Tuesday October 14: On October 14, the residents of Genoa City gather to honor Delia’s memory on the anniversary of her death. Y&R spoilers reveal that Elizabeth Hendrickson returns as Chloe Mitchell for the anniversary of her daughter’s death. Fans speculate that she might return with a baby bump, since the last time we seen her she was leaving town with a sample of Billy’s sperm.

Wednesday October 15: Avery’s ex Joe Clark reaches out to Cane for assistance, Y&R spoilers tease that he has arrived in Genoa City with a revenge agenda. Meanwhile, Neil plans an elaborate surprise for his wife Hilary, who is busy with Devon and caught off guard.

Thursday October 16: The Young and the Restless spoilers tease that on October 16 Victor Newman returns to Genoa City with Faith Newman’s paternity test results and has interesting news to share. No one ever questioned whether Nick Newman was really Faith’s father, and it looks like Victor may have stumbled upon a secret no one knew existed.

Friday October 17: According to Y&R spoilers, on Friday’s episode Michael and Lauren find themselves once again trying to rekindle their romance. Michael has been struggling with erectile dysfunction, but according to spoilers his condition may be much more serious than he or his wife realize.

So Y&R fans, do you think Chelsea and Billy’s relationship is doomed or do they stand a chance? Will Chloe surprise everyone with a bun in the oven? Is this the week that Neil finally catches Devon and Hilary having an affair? And, who do you think is Faith Newman’s father? Let us know what you think in the comment section below and don’t forget to check CDL tomorrow for more The Young and the Restless spoilers.