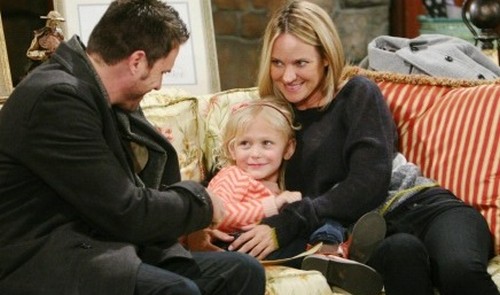 The Young and the Restless spoilers for the week of October 13-17 reveal that the love triangle between Devon, Hilary, and Neil will really be heating up. While trying to deal with his blindness, Neil lashed out at Hilary and told her to leave Genoa City, so she headed to NYC. Y&R spoilers tease that on Monday October 13 Devon pays Hilary a visit so they can have a romantic rendezvous. However, Neil decides he doesn’t want to give up on his marriage quite yet and The Young and the Restless spoilers tease that on Thursday, October 16 he has a romantic surprise for his bride.

The Young and the restless spoilers have been teasing Summer’s paternity test mix-up for months now. However, it looks like she isn’t the only Genoa City resident that has been being raised by the wrong man. Victor Newman had a paternity test done on Sharon’s daughter Faith, because he believed she was the one who’s paternity was in question. And, according to Y&R spoilers on Thursday October 16th he returns to Genoa City with Faith’s shocking paternity test results.

The Young and the Restless spoilers for the week of October 13 also reveal that Y&R fans can expect to see Billy and Chelsea struggling to make their romance (that we all know is doomed) work, and Billy makes a surprising confession to his new lover. Also, fans can expect to see Paul’s plan to capture Ian Ward hit a snag, and Michael and Lauren continue to struggle rekindling the romance in their marriage.

So Y&R fans, what do you think of the love triangle between Devon, Neil, and Hilary? Who do you think Hilary will choose? And, what about Faith’s paternity test results? Who do you think her real father could be? Let us know what you think in the comments below and don’t forget to check CDL tomorrow for more The Young and the Restless spoilers.