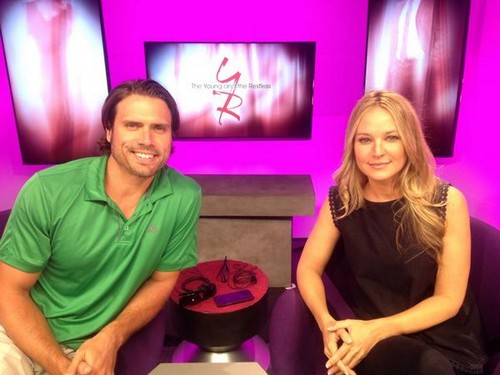 The Young and the Restless spoilers for the week of October 6-10 tease that Y&R fans will not want to miss a single episode, the drama is really heating up in Genoa City. Mariah teamed up with Victor Newman because she didn’t want to see Nick and Sharon go through with the wedding. So, when Victor doesn’t seem to be working fast enough to destroy their nuptials, Mariah takes matters in to her own hands and threatens her mom, Sharon.

Y&R spoilers have been lining up an interesting storyline between Chelsea and Billy, which we all know is doomed because of Adam Newman’s return in November.  According to Y&R spoilers, during the week of October 6 Chelsea and Billy’s relationship will hit a few speed bumps.  Chelsea begins to question if Billy will ever love her more than Victoria when the pregnant princess calls for help and Billy leaves Chelsea hanging high and dry. Billy however, has doubts of his own when Chelsea begins calling out Adam’s name in her sleep.

Dylan and Paul are exploring the dynamics of their father and son relationship during the week of October 6 while they work together to bring down villain Ian Ward.  However, it’s bumpy terrain when they realize they don’t see eye to eye on how to bring Ian down.  While Dylan sits in the Genoa City slammer, Avery’s ex Joe Clark continues to pose a threat.  Y&R spoilers reveal that Joe informs Avery he has no intentions of leaving Genoa City anytime soon, and rumor has it that his business ventures are actually more like a personal vendetta.

According to The Young and the Restless spoilers for October 6 – 10 fans can also expect to see Jack Abbott get the shock of a lifetime on Friday, which we’re assuming means he comes fact to face with his not-so-comatose ex Phyllis.  Yes Phyllis returns with a vengeance! And, Devon jets off to New York City for a romantic rendezvous with his step-mom Hilary!

So Y&R fans, do you think Chelsea and Billy’s relationship is doomed or are they going to overcome their obstacles just to get torn apart again when Adam Newman returns? Will Dylan and Paul’s plan work, or is Ian Ward smarter than they give him credit for? And, how do you feel about Joe Clark, what do you think his true intentions are?  Let us know what you think in the comments below and don’t forget to check CDL tomorrow for more The Young and the Restless spoilers.

Maybe Joe Clark has something to do with how Dylan is being targeted for the murder of Ian Ward…..i.e. his intent of getting back with his ex-wife Avery! That’s just a guess! I could be wrong……I mean, what do we know about Joe Clark? Nothing, except that he was married to Avery and she had an affair with Dylan at the time!

I think Joe is involved up to his ears with Ian!! Don’t like him a bit!!

I AGREE WITH Bernice Rickett MARIAH NEEDS SOMEONE TO KNOCK HER ASS OUT. DID THEY FINISH THE WEDDING AT LEAST? NO ONE HAS SAID THAT PART??? I HOPE SO

that what I said too