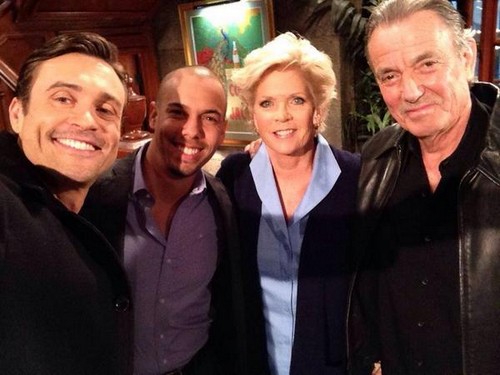 The Young and the Restless spoilers reveal a week of exciting drama will go down during September 22-26. Phyllis Newman is officially awake from her coma, and on the move. Y&R spoilers tease that on Monday September 22 Phyllis will escape from the medical clinic and hitch-hike down the highway, meanwhile the doctor and nurses search frantically for their missing patient and lie to Summer over the phone and tell her that Phyllis is still safe and sound and there are no changes in her status.

Mariah pays her new BFF Victor Newman a visit during the week of September 22nd, and The Young and the Restless spoilers reveal that in exchange for Sharon’s secret, Victor offer to pay Mariah enough money to help her leave Genoa city for good (he reneges, of course). However, Mariah tells Victor the wrong secret! Apparently Mariah overhears Sharon talking in her sleep about Nick’s paternity test, and she tells Victor that Sharon tampered with Faith’s paternity test, not Summer’s!

Y&R fans have been watching Nikki Newman slowly fall off the wagon for weeks now, but somehow she has miraculously kept her drinking a secret. According to The Young and the Restless spoilers, all that is about to change when Paul catches Nikki drinking vodka! Y&R fans can also expect some interesting revelations in Ian Ward’s mysterious disappearance. Paul Williams reportedly lies about the mud on Dylan’s shoes to cover for him, and devotes the week of September 22nd to tracking down the phone number of the person that called Ian’s insurance company. Y&R fans can also expect to see Hilary attempting to run away from Genoa City and her messy love triangle, and Jack and Kelly’s relationship will really heat up.

So Y&R fans, what do you think about the mysterious disappearance of Ian Ward? Is Dylan really responsible, do you think that Paul should be risking his job to protect him? And, why do you think Mariah told Victor the wrong secret? Do you think she just misunderstood or she is up to something? Let us know what you think in the comments below and don’t forget to check CDL tomorrow for more The Young and the Restless spoilers.