The Young and the Restless Spoilers: Does Victoria Have a Miscarriage – Phyllis Ruins Nick and Sharon’s Wedding and Collapses 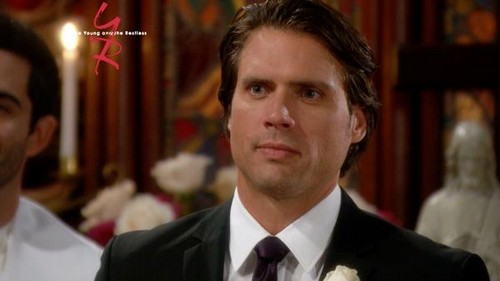 The Young and the Restless spoilers have been teasing Phyllis Newman’s return to Genoa City for months now. And, just like we all predicted, she made her big arrival literally seconds before Sharon and Nick Newman said their “I Do’s.” According to CDL’s exclusive Y&R spoilers for Monday October 6, Phyllis is en route to the church when she is interrupted by a cop who wants to arrest her for assaulting a stranger that groped her while she was hitch-hiking. After arguing with the police officer, Phyllis seems to talk her way out of the crimes and rushes to the church.

The Young and the Restless spoilers tease that Phyllis Newman sure knows how to make an entrance, literally just a few moments before Sharon and Nick are announced husband and wife, Phyllis barges through the doors and stops the ceremony. Her friends, family, and the rest of Genoa City are naturally shocked to see her, since they all thought she was laying in Georgia in a coma. Y&R spoilers tease that Phyllis successfully stops the wedding, however she passes out in front of everyone before she can reveal to Nick what Sharon did to Summer’s paternity test. Isn’t it ironic that Phyllis hitchhiked all the way to Genoa City after escaping from the clinic and seemed perfectly fine, but the moment that mattered the most arrived and she passed out? Still her arrival was good enough to stop the wedding! There will be time for secrets to be spilled later.

Aside from Nick and Sharon’s almost wedding, and Phyllis big return, Y&R spoilers for October 6 tease that Victoria Newman has another complication with her pregnancy and Abby rushes her to the hospital. Once Victoria is checked in, Abby decides that Billy should be by her side and supporting his maybe baby-mama, however he isn’t answering his phone because he is with Chelsea. So, Abby takes it upon herself to go over to Billy’s house and confront him – and crash his date with Chelsea. Will Victoria have  a miscarriage – this is her second pregnancy emergency.

So Y&R fans, are you excited to see Phyllis’s shocking return to Genoa City? How do you think Kelly will react when Phyllis waltzes in to the wedding? Should Billy ditch Chelsea to go be with Victoria, after all Victoria divorced him and declared that she was raising the baby by herself regardless of who the father was? Let us know what you think in the comments below and don’t forget to check CDL tomorrow for more The Young and the Restless spoilers.

Sharon did a lot of bad things! Off her medicine or not she changed medical records, caught Victor’s house on fire, defaulted Newman enterprises and took over under false pretenses, and yes Phyllis’ fall was an accident, but Sharon left her there to die. She also did everything in her power to break up their marriage.

Hope they don’t continue to drag out the secret

Well Sharon grosses me out. She slept with Nicks dad and Nicks brother.. Keeping it in the family.. lmao Eww Team Phyllis lol Plus Summer didn’t deserve this

It is alright to blame Sharon and not forgive her even when Nick did it first and the fall was an accident . Not fair .

No Sharon was the one who went out on Nick with Brad! Then she pushed him away when Cassie died. And yes, Phyllis fall was an accident, but Sharon left her there to die! I forgive her but she isn’t an innocent victim either.

Wish Phyllis would get to tell the truth.

At the time, I really liked the idea that Sharon switched the paternity test. It was such a soapy little twist. But it’s dragged on for so long that I no longer care!

Did any of you watch the show before 2014. They did the test. Faith is Nicks not Brads, Victors,bens, kevins, coles, stitchs, Dylans Neils, sams, joes, Devons, Jacks,the camermans, Easter bunnies, tinmans, satens, She is Nicks OK.

They did a pertinity test on Nick, Faith,Ashley, And Sharon when they found out Adam gave Sharons baby To Ashley. Remember, it was NICKS BABY.

Do yall remember Brad died before Faith was born , you cant pin that one on Brad. He died saving Noah life in the lake Remember