The Young and the Restless Spoilers: Do Victoria’s Cramps Lead to Miscarriage and Baby Loss – Sharon Catches Mariah Seducing Nick 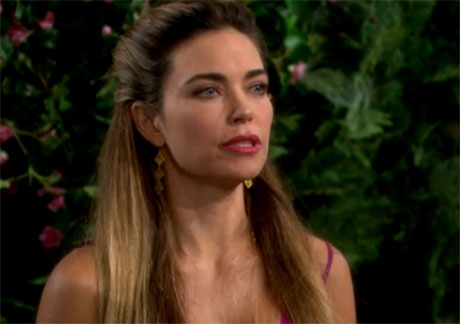 The Young and the Restless fans have speculated for weeks whether Victoria Newman was pregnant with Stitch Rayburn or Billy Abbott’s baby. According to The Young and the Restless spoilers for Monday August 18, there might not be a baby at all. Y&R fans were shocked when Victoria actually got pregnant because she had tried to have a baby in the past and had been told that she would never conceive.

Our exclusive The Young and the Restless spoiler source reveals that on August 18th Chelsea and Billy will be chatting at the park, as they are about to kiss Victoria catches them. After grumbling about them spending so much time together, Victoria apologizes and blames it on her hormones. Once Billy and Chelsea leave and Victoria is alone in the park, she begins having painful cramps in her stomach. Considering she is so early along in her pregnancy, the pain she is experiencing could definitely mean she is having a miscarriage and could lose the baby.

The Young and the Restless spoilers for August 18 also reveal that Mariah makes a move on Nick Newman. Fans can expect to see Mariah prancing downstairs to surprise him in lingerie and running in to Sharon instead. Sharon finally realizes what Mariah has been up to, and that the girl she opened her home to is trying to seduce her husband. According to Y&R spoilers, fans can also expect to see Nick Newman investigating Mariah’s past further. Meanwhile, Neil will struggle with his blindness and Hilary tries to come clean about Devon to him, but Devon interrupts her and won’t let her tell Neil about their affair.

So Y&R fans, are you as grossed out as we are about Mariah trying to seduce Nick? Do you think Sharon will kick her maybe-daughter to the curb? And, what about Victoria, do you think that she is having a miscarriage? Share your thoughts and theories in the comments below, and don’t forget to check CDL tomorrow for more The Young and the Restless spoilers.