The Young and the Restless Spoilers: Adam Newman Outraged Seeing Chelsea and Billy With Connor On Spy Cam

BY Amanda Austin on May 27, 2014 | Comments: 15 comments
Related : Soap Opera, Spoiler, Television, The Young and the Restless 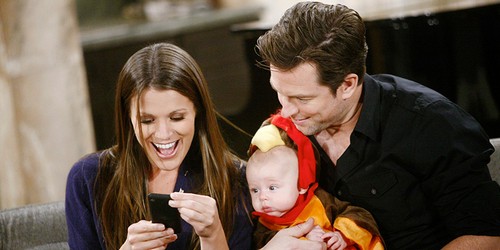 There are some major cast shake-ups occurring behind the scenes of CBS’s daytime drama The Young and the Restless, however it still hasn’t been revealed what actor will be replacing Michael Muhney and playing the part of Adam Newman. Rumor has it Jill Farren Phelps and TPTB at Y&R still haven’t even cast the role, because they can’t find a decent actor that is willing to take on the controversial part.

Despite the fact that no one has actually been cast as Adam Newman, the character does still appear for brief thirty second scenes about once every few weeks, we just never see his character’s face. The last time we seen Adam Newman he had hired someone to go into Chelsea’s house and pose as a mold inspector and set up a hidden camera in his son Connor’s nursery so that he could watch over him from afar.

We predicted exclusively last week that it would only be a matter of time until Adam seen his nemesis Billy Abbott on the spy camera since he has been spending so much time with Adam’s wife Chelsea. And, according to our CDL exclusive The Young and the Restless spoilers source, we were 100% right. On the Tuesday, May 27th episode of The Young and the Restless Billy takes Chelsea’s son Connor up to his room to put him to bed and his comforting the baby and hugging him, all while Adam Newman watches on the spy cameras he had installed. Obviously we don’t see Adam Newman’s face, but the fact that he snaps the pencil he is holding in half is a pretty good indicator that he is furious. Then again, how would you feel if you saw the man that tried to kill you holding your son?

The fact that Adam Newman is now aware of how close Billy and Chelsea are becoming, and that Billy is playing the part of Connor’s father figure as of late sets the stage for Adam Newman’s return to Genoa City. What do you think about the latest developments in the Adam Newman storyline? It looks like Adam will be returning to Genoa City much sooner than we anticipated, who do you hope to see replace Michael Muhney in the iconic role? Let us know what you think in the comments below and don’t forget to check CDL tomorrow for more The Young and the Restless spoilers.

The fans on Soap Opera Spy have what to say about this:

They are milking that Adam recast. It’s gonna be a big fail like everything else JFP does. That said, Adam’s hand is probably my fave character due to the writing, lol.

David Tom was not right for Billy Abbott role. The voice and the small body frame did not work AT ALL.

I can’t wait for the new Adam

It better BE the OLD Adam!!! They are ruining the show!!

Billy Abbott MUST be tall…manly…deep sexy voice. …muscular. ..perfect face…sex on a stick….After all…he IS an Abbott

Only MM can play Adam!!!

Wouldn’t it be a shock if MM actually made it back onto Y&R? Facts are that much of the cast ganged up on Michael and as we saw on Eric Braden’s Twitter recently there remain hard feelings. I’m pretty sure there is almost no chance that MM will return Genoa City. Many are hoping (me included) that he makes his way over to Port Charles where he will be appreciated rather than deprecated.