The Young and the Restless Spoilers August: Chelsea and Connor Get a Clue Adam’s Alive – Michael Muhney Replacement? 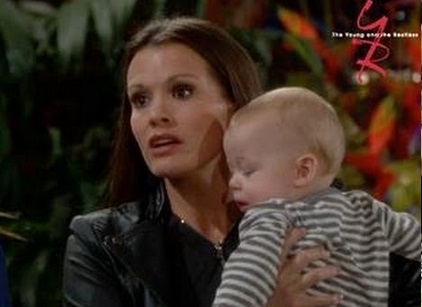 The Young and the Restless spoilers have been teasing for months about Adam Newman’s return on the CBS soap opera. The character was killed off during a fiery car crash in January, but it was later revealed to the audience that he was still alive; he faked his own death. Adam Newman had a spy camera set up in his old house so that he can keep an eye on his wife Chelsea and son Connor, who have absolutely no idea he is really alive. Since it was revealed that Adam Newman is actually alive, Y&R fans have been seeing thirty second clips of the character’s hands a few times a month. But, according to new The Young and the Restless spoilers, all that might be about to change.

According to the August 25th edition of CBS Soaps In Depth, Adam Newman sends Chelsea and Connor a clue that he is still alive. Billy helps Chelsea throw a party to celebrate Connor’s birthday. After the festivities are all said and done, Chelsea finds an unmarked present for her son. Upon opening it, she realizes it is a soccer ball. She assumes the gift is from Victor, since Adam used to talk about Victor teaching him how to play soccer, but according to Y&R spoilers the present is actually from Adam Newman!

Rumor has it that TPTB at The Young and the Restless still haven’t found an actor to replace Michael Muhney, but the fact that Adam Newman is becoming bolder and sending clues to his wife that he is alive, means that it is only a matter of time before Adam Newman returns.

What do you think, Y&R fans? Do you think Chelsea will figure out the soccer ball is from Adam? Who do you want to see playing the part of Adam Newman when he does return? Let us know what you think in the comments below and don’t forget to check CDL tomorrow for more The Young and the Restless spoilers.