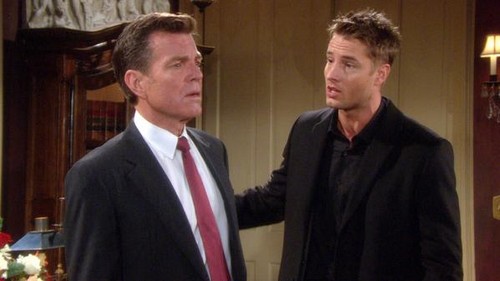 The Young and the Restless spoilers tease that the week of December 29 – January 2 will be full of exciting drama and revelations, and of course some New Years festivities in Genoa City. Rumor has it that Y&R fans will not want to miss a single episode of the CBS soap this week! The Young and the Restless spoilers tease that on New Years Eve, Nikki shocks everyone by making an unexpected confession – according to Y&R rumors the troubled matriarch finally comes clean about her latest battle with the bottle.

The Young and the Restless spoilers tease that the week of December 29 is a busy one for Adam Newman/Gabriel. As Constance’s health takes a turn for the worse, Adam is a little too busy making a move on Chelsea (who has no idea who he is) to sit vigil at his fake Grandma’s deathbed. Meanwhile, spoilers reveal that Sage has had enough of Adam’s poor portrayal of Gabriel and the mysterious woman finally snaps on her partner-in-crime, and the battle lines are drawn. But things threaten to get stickier yet for Adam… apparently Nick gets on track and begins to question Gabriel’s facade. As Nick puts the pieces together he gets closer to discovering that his dear brother Adam is in fact Gabriel! How long will it be before Adam Newman is exposed?

In other The Young and the Restless news, the week of New Years finds our favorite Genoa City residents reflecting on the past…and the future. Y&R fans can expect to see Jill and Cane have a heart to heart about the New Year, and across town Neil’s eyesight continues to be on the mend. Rumor has it he may see a little more than he bargained for though, like possibly Hilary and Devon smooching at midnight?

So, Y&R fans, are you excited for New Years in Genoa City? What do you think Nikki’s confession is? Will Neil get his eyesight back on the holiday? Could Sage actually expose Adam Newman if he pushes her too far? On the other hand, is Sage hiding a murderous secret of her own? Will Chelsea figure out that Gabriel is her not-so-dead hubby? Will Nick realize Gabriel is his brother Adam? Let us know what you think in the comments below and don’t forget to check CDL tomorrow for more The Young and the Restless spoilers and news.