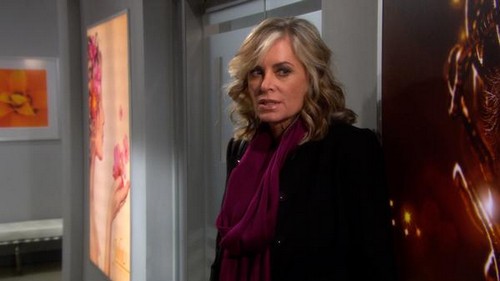 Monday December 15: The Young and the Restless spoilers tease that on Monday’s episode of Y&R Paul and Dylan share their exciting news with each other. However, Christine isn’t thrilled when she hears Paul leaking news of their pregnancy, because she hasn’t actually been to the doctor yet and confirmed the home pregnancy test results. Meanwhile, across town Adam Newman runs in to Connor and Chelsea at the park and shares a moment with his family.

Tuesday December 16: According to Y&R spoilers for Tuesday’s episode, fans can expect to see an intense conversation between Avery and her ex Joe – who is not thrilled about the news of her engagement to Dylan. Meanwhile, Kelly and Jack continue to feud over his relationship with Phyllis.

Wednesday December 17: The Young and the Restless spoilers reveal that on Wednesday December 17 Neil Winters makes a major decision about his future, and after filling Cane in on his plans – he leaves his son-in-law shocked. Rumor has it that Neil may undergo surgery to get his sight back, and see something about his wife that he hadn’t bargained for.

Thursday December 18: Thursday’s episode of The Young and the Restless will feature two rival Genoa City women, finally making amends and making a valiant attempt to put the past behind them. The love triangle between Billy, Chelsea, and Victoria has raged on for months and even though Billy now shares a daughter with his ex-wife Victoria – Chelsea is determined to stand by her man. Y&R spoilers tease that fans can expect Victoria and Chelsea to finally sit down and chat about their relationships with Billy.

Friday December 19: Friday’s episode of the CBS soap teases some exciting spoilers for Y&R fans. According to the latest edition of CBS Soaps In Depth, Mariah and Sharon will have a heart to heart conversation, and “Nick and Sharon’s worlds will be rocked.” Rumor has it that their daughter Faith may run away from home after she grows tired of her parents fighting over her.

So Y&R fans, do you think that Christine is really pregnant – or could the home test have been wrong? Is Avery and Dylan’s engagement in trouble, could her ex Joe Clark cause a serious problem for the soon to be married couple? What do you think will happen on Friday that “rocks Nick and Sharon’s world?” Let us know what you think in the comments below and don’t forget to check CDL tomorrow for more The Young and the Restless spoilers, polls and news.