The Young and the Restless Spoilers June 2-6: Sharon Leaves To Help Mariah – Colin Sets Jill Up – Nick and Tyler Fight 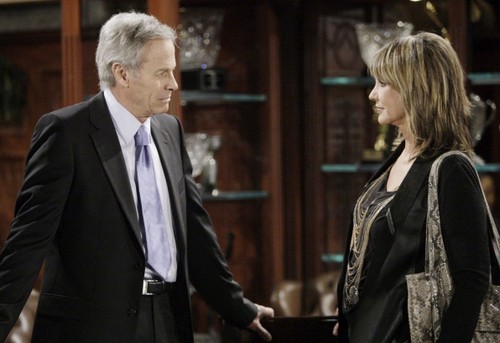 According to The Young and the Restless spoilers for the week of June 2-6, the drama will be really heating up in Genoa City.  We’ve been watching Jill and Colin struggle with the mystery of the music box for months, and they finally found the treasure they were looking for hidden in an old lamp. Y&R spoilers for the week of June 2nd tease that Jill and Colin get their treasure appraised and learn that they stumbled across $18 Million worth of jewels. When Jill announces they won’t be cashing in on the gems, Colin is back up to his old tricks, and arranges for someone to break in to Jill’s house and steal the treasure.

Mariah isn’t even in Genoa City and she is still stirring up a ton of drama for the characters of The Young and the Restless. She manages to cause a riff between Sharon and Nick and Tyler and Abby from a totally different zip code. Y&R spoilers for the week of June 2nd tease that Sharon Newman heads to Portland to help Mariah, despite her husband Nick strongly advising against it. Back home, Nick and Tyler have an altercation over Tyler asking Sharon to go to Portland, and his pending break-up with Nick’s sister Abby.

The Young and the Restless spoilers for the week of June 2nd also tease that Avery confronts Ian Ward about her online stalker. And, meanwhile Dylan continues to work with Victor Newman, against his Mom Nikki’s wishes, and dig up some dirt on the master manipulator Ward. Meanwhile, Victoria Newman’s pregnancy causes some more drama in Genoa City as Billy threatens Stitch, and her Dad Victor takes Stitch’s side.

What do you think of the June 2nd-6th spoilers? Can you believe that Colin is back to his old ways and setting Jill up to be robbed? Were you as fooled by him as we were? Do you think that Ian Ward is really Avery’s online stalker or do you have another suspect in mind? Share your thoughts and theories in the comment section below and don’t forget to check CDL tomorrow for more The Young and the Restless spoilers.