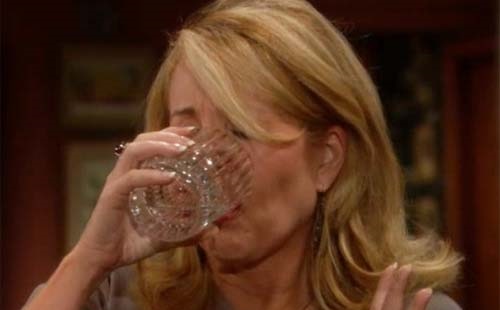 The Young and the Restless spoilers for the week of September 8-12 tease some must see drama on the CBS soap opera for Y&R fans. Spoilers revealed weeks ago that Meredith Baxter (of Family Ties fame) had been added to the Y&R cast, and she will make her big debut as Maureen on Monday, September 8. According to spoilers in CBS Soaps In Depth, Maureen is quite a trouble-maker and will be Nikki Newman’s new drinking buddy and partner in crime. Recently, Nikki fell off the wagon (again), and rumor has it Maureen will be a huge enabler for the troubled alcoholic.

The Young and the Restless spoilers for the Week of August 8th also reveal that Victor Newman will be hard at work in Georgia trying to stir up some memories from a recently woken up Phyllis. Apparently, there is a slight hiccup in Victor’s scheme to reveal Sharon’s secret — Phyllis can’t remember it! But, Victor is determined to find out what Sharon has been hiding from Nick, by any means possible. And Victor will be in a race against the clock because Y&R spoilers reveal that on Friday, September 12th, Nick proposes to Sharon!

Y&R spoilers also reveal that Shemar Moore will be returning as Neil’s brother Malcolm for a brief visit on Wednesday, September 10th. Considering Neil’s recent accident and the fact that he is blind, he could really use some support from his brother, who he hasn’t seen in ages. Maybe Malcolm will see what his brother literally can’t and expose Devon and Hilary’s affair?

The Young and the Restless spoilers for the week of September 8th also tease that Chelsea Newman returns to Genoa City from her business trip, and will have made some decisions about her love life while she was away. Jack’s love life becomes seriously complicated as well, and spoilers hint that he will learn that Phyllis is awake during the week of September 8th. Meanwhile, Paul Williams begins investigating Ian Ward’s bizarre disappearance and the bloody footprints he found, and he has a suspect in mind.

So, Y&R fans, what role do you think Nikki’s new drinking buddy, Maureen, will play in Genoa City? Do you think she is linked to any of the other characters? And, what about Nick proposing to Sharon, do you think they will make it down the aisle again? Let us know what you think in the comments below and don’t forget to check CDL tomorrow for more YR spoilers.