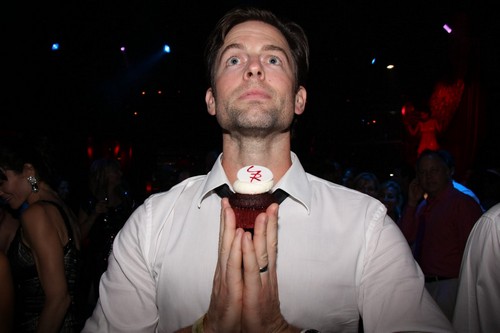 The Young and the Restless fans are buzzing about the iconic character Adam Newman, and his impending return to Genoa City. Despite the fact that Michael Muhney was fired by Jill Farren Phelps and TPTB at The Young and the Restless back in December 2013, some fans are still clinging to the hope that when Adam Newman returns to Genoa City and reveals he isn’t dead, it will be Muhney in the role.

Although there were no official charges ever filed against Muhney, it was revealed by multiple sources that the reason he was let go was related to accusations made against him by co-star Hunter King, she claimed he groped her and harassed her. Muhney’s fans were in an uproar over the accusations and despite the fact that the incident occurred nearly six months ago, it is still a very controversial subject.

Hundreds of Thousands of Muhney’s supported have since boycotted the soap opera, and refuse to watch again until the actor is reinstated. Considering the circumstances surrounding his firing, the odds of him returning to the set of Y&R are slim to none, however a recent report from Soap Opera Digest will give fans a sense of hope.

According to the June 9th edition of Soap Opera Digest, Michael Muhney was recently spotted on the set of The Young and the Restless. The magazine goes on to say, “The search for an actor to play Adam has intensified in the last few weeks, and insiders report that Michael Muhney could be back in the mix to reprise the role. The actor, whose controversial exit last December sent shock waves throughout the community, was reportedly spotted at the Y&R studios.”

So, it turns out there is a possibility that those hands we keep seeing on Y&R could truly belong to Michael Muhney? Do you believe the report in Soap Opera Digest? Would you lose respect for Michael Muhney if he actually returned to The Young and the Restless after they treated him so badly and tarnished his reputation? Let us know what you think in the comments below, and don’t forget to check out CDL’s The Young and the Restless spoilers.

This is huge news and Soap Opera Spy fans react:

Yes , I watch only the end to see his hands the rest of the show boring beyond belief.

Bring MM!! Fire Phelps! Recast Hunter King when her contract is up!

I am sure if he happens to be reinstated, it will be with a fat juicy paycheck! and good for him!

Id be one very happy girl!!!

The Adam Newman fan in me would be thrilled, but I would totally get it if he told them where to go. I support MM in whatever he chooses to do.

Please, please, please let this be true and MM is returning to his role of Adam! Fingers and toes crossed!

I would be worried if he came back and JFP and Hunter were still there, what else would those two try to do to him. I wouldn’t come back otherwise if I were him. As much as I’d like to see him back . Better he go to GH.

Let’s hope this sighting of MM on the Y&R set is for real and indicates a possible return of Michael as Adam Newman. We are covering this story and will get back to you ASAP with more info. The exchange of views on SOS continues:

Thing is, hunter may have been part of the big deception. I just find it odd thatsomething that has this much understory was basically quiet with the tabloids. If so, no need to get rid of hunter as she was in on the hush hush story and there was no bad blood between the two. Also odd that mm is posting to twitter again after radio silence. My spidey sense tells me there is something brewing.

I hope they do bring him back. He sure did play the part well….and while they are correcting mistakes; bring the correct Billy back.

Yes , I watch only the end to see his hands the rest of the show boring beyond belief.

LOL I have said it before it is sad when the best actor on the show is a hand.

Talk about a hostile work environment! I just can’t see MM going back and putting himself in the line of fire day in, day out. No amount of money would be worth it.

Yes!!! Bring Michael as Adam back to Chelsea and “Peanut”, and as the succession plan for Newman Industries!!!

Please, please, please let this be true and MM is returning to his role of Adam! Fingers and toes crossed!

Couldn’t agree more……bring back MM…wave bye bye to Billy and Summer, hire a new writing staff, and drive Jill to the airport to go anywhere that doesn’t have television to screw up yet! Maybe she could look for that missing plane…..keep her busy!

Well what do you think? Could Michael really be in negotiations to return to Y&R? The show can’t continue using what are practically disembodied hands to portray Adam Newman so it’s only a matter of time until we learn the truth.