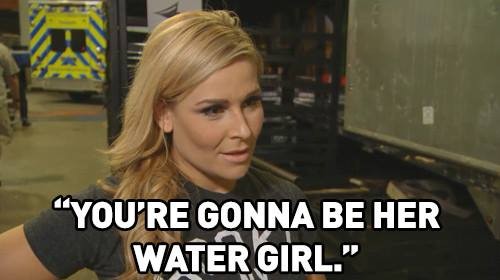 Tonight on E! the WWE’s Total Diva starring the Bella Twins and the rest of the Divas returns with an all new Sunday September 21, Season 3 episode 3 called, “Roadside Rumble.” On tonight’s episode, Brie and Daniel Bryan are in danger of losing their wrestling careers.

On last week’s episode Brie regretted quarreling with her husband when he delivered devastating news; Nikki’s secret had John fearing the end of their relationship, and Trinity was blindsided when Ariane put the future of the Funkadactyls at risk. If you missed last week’s episode and want to catch up before tonight’s episode with a full and detailed recap, we have one for you right here!

On tonight’s episode Brie and Daniel Bryan are in danger of losing their wrestling careers; Nikki is put in a tough spot with John; Rosa fails miserably at making peace between two enemies; and the wedding standoff between Eva’s father and husband comes to a head.

Tonight’s episode of Total Divas picks up with “Payback” in Chicago, Illinois. The WWE producers have decided to write Bryan’s injury in to their storyline. Stephanie McMahon takes the ring, and informs Bryan either he hands over the title, or they will fire his wife Brie. Brie screams at Stephanie that she quits, and then slaps her. They wrote the script so that Brie can take time off with Bryan for the next eight weeks while he recuperates.

Bryan and Brie meet with Brie’s mom Lauren for lunch the next day, and they discuss their future. They realize that they don’t have any back-up plan if their wrestling careers don’t work out. Lauren owns an employment agency and convinces them to both come in and meet with a recruiter and take an aptitude test to see what kind of jobs they would qualify for in the real world. The next day they meet with the recruiter, and it doesn’t go well. Bryan and Brie realize that there isn’t much they are qualified to do besides wrestle.

Back at the wrestling ring, Eva and Nattie are watching the cameras and are shocked when a chicken removes their mask and they realize it is Summer Rae. Later Rosa and Nattie head to the gym together and Summer Rae waltzes in. Rosa rushes to hug her, but Nattie isn’t very welcoming. Summer wants to brag about the movie she just finished filming for WWE, but Nattie tells her that no one cares and none of the other girls are jealous. She tells Summer that her replacement Layla has been doing an awesome job valeting Fandango while she was gone because she is a “real dancer.” After Summer leaves Rose asks Nattie what her problem is, and Nattie informs her that the only reason Summer is being nice to her is because she is friends with Nattie and is trying to come between them.

Bryan decides that he and Brie should own their own business and heads online to research possible business ventures. They decide they should open a bed and breakfast and run it as an eco retreat. They find one in Flagstaff for $800,000 but Bryan says they can’t afford it. Brie is sure that there is a way to work it out.

Brie convinces Bryan to go to Flagstaff to look at the bed and breakfast for sale. She is thrilled during the tour when she realizes that they have a wine shop on the premises, they check out all six of the bedrooms. Brie is in love with the property, and tries to convince Bryan that they should take out a mortgage, but he doesn’t want to go in to more debt since they just bought a house.

It’s 4th of July weekend and Eva Marie and her husband head to Eva’s family cook-out. On the way there Eva tells Jonathan not to talk to her family about the wedding, because they are still fighting over whether it will be a Catholic wedding. Jonathan refuses to convert though. As soon as they arrive Eva’s family corners them about the wedding. Jonathan is upset because he thinks Eva’s family is ganging up on him and she is throwing him under the bus, and he storms off. Eva follows Jonathan and tries to talk to him, she insists that she just wants to make everyone happy and her dad is pressuring her. Jonathan understand that she wants to make her dad happy because he is very sick, but he says that this entire thing is ridiculous.

Nikki and Brie head out for drinks, Brie fills Nikki in on her and Bryan’s plan to buy a bed and breakfast and turn it in to an eco retreat. But, they need to make a down payment of $150,000.00 and they don’t have it. Nikki is shocked when Brie asks if she can borrow $100,000 from John, she says that it probably won’t be a problem, but really she has no idea if John will let them borrow the money.

Eva takes her Dad aside at the barbecue and informs him that Jonathan isn’t going to convert to Catholicism, and cries that they can’t have a Catholic wedding and she doesn’t want her family to be disappointed. Her Dad reassures her that if she and Jonathan are happy then he is happy, and it’s okay they aren’t having a Catholic wedding.

Nikki heads out to lunch with John and tells him about the bed and breakfast that Brie and Bryan want to buy. She tries to casually drop the bomb that she volunteered him to lend them $100,000. But, John doesn’t seem too happy that she offered up a hundred grand of his money. John tells her that he can’t lend them the money, all of his family members hit him up for money for business ventures and they never work, and he never sees a dime of the money that they promise him. Nikki says she understands where he is coming from, and he volunteers to tell Brie himself that he isn’t loaning them the money.

Bryan receives a phone call from John about the loan and he has no idea that Brie even asked them to borrow the money. He storms out in the kitchen and demands to know why Brie asked John for $100,000. He’s furious that she would do that without talking to him, and reminds her that now that they are married it’s both of their bank account, not just her’s.

Nattie and Rosa split a rental car, to drive to the next tour stop. Kattie is livid when she heads to the parking garage and sees Summer loading her stuff in to the trunk. Apparently, Rose invited her to ride with them on the road. Rosa reminds Nattie that she paid for half of the car, and she can invite whoever she wants. As soon as they hit the road, Nattie starts complaining about her nose and how she can’t smell anything because Summer broke her nose when she hit her. Nattie and Summer begin yelling back and forth, and Rosa tries to interrupt but they don’t listen. Summer mentions Nattie’s husband TJ and Nattie pulls the car over like a mad woman and begins dragging Summer out of the backseat by her hair. Rosa cries for them to stop fighting. Summer finally gets out of the car, and then throws down with Nattie. Nattie grabs her bag and tries to leave but Rosa has a meltdown and makes everyone get back in the car and tells them neither of them are allowed to talk because she is too stressed out.

The next day Nattie takes Rosa aside and apologizes that everything got so out of control. Rosa admits that she shouldn’t have invited Summer, she had no idea that their issues with each other were so bad. Rosa says that Summer said some pretty messed up things, and now she understand what Nattie’s problem with is her. They hug it out, and agree not to invite people to ride with them without asking each other in the future.

Nikki and Brie head to an autograph signing, and bicker the entire time about John and Nikki not letting her borrow the money. Brie admits that she shouldn’t have asked for such a huge loan, she is just nervous about the future. Nikki says that she should get her staging license and then she could help her earn money in real estate. Later that day Nikki apologizes to Bryan for asking for the loan without checking with him, Bryan forgives her and says that her heart was in the right place. But from now on Nikki has to check with him whenever she makes a purchase of over $100.