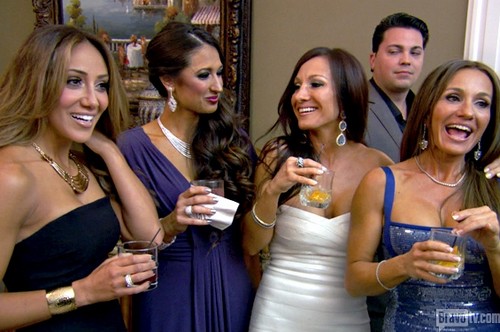 Real Housewives of New Jersey’s new cast members have brought a ton of drama to the Bravo reality TV show this season, especially the twin sisters Teresa Apreas and Nicole Napolitano. Since Teresa Apreas and her husband Rino joined the RHONJ cast, their marriage has been brought up on more than one occasion and rumors of Teresa’s hubby Rino being unfaithful have run rampant.

So, what’s the big deal, isn’t there a cheating scandal in every Real Housewives’ series? Well, Teresa has insisted that her husband Rino would never cheat on her, and is constantly trying to rub how amazing her marriage is in her cast mate’s faces. Apreas even went as far as to say that, “Even 20 years ago when we got divorced, one thing, and I can say this wholeheartedly, my husband is not a cheater. Yes, people will talk and people will start rumors but… he adores and cherishes the ground that I walk on.” The confident RHONJ star went on to say, “I would never say, I have the perfect marriage. But one thing I never have to compete with is another woman. Absolutely not.”

You would think that by now these Real Housewives newbies would know that when they join the show, every single skeleton in their closet will be dragged out and exposed. If Teresa Apreas thought she could keep her husband’s infidelities a secret, then she is clearly delusional. According to Real Housewives Of New Jersey spoilers in the September 1st edition of OK! Magazine, Victoria Gotti will make an appearance this season and expose Teresa Apreas husband Rino’s cheating ways, and fill Teresa Giudice and Amber Marchese in on the juicy affair. According to OK! Magazine, Victoria Gotti’s shocking revelation causes quite an uproar on the Bravo reality series.

So RHONJ fans, how are you liking the new cast members so far? What do you think about Teresa Apreas lying about her husband’s cheating? Did you know all along there was no way Rino was being completely faithful? Let us know what you think in the comments below!