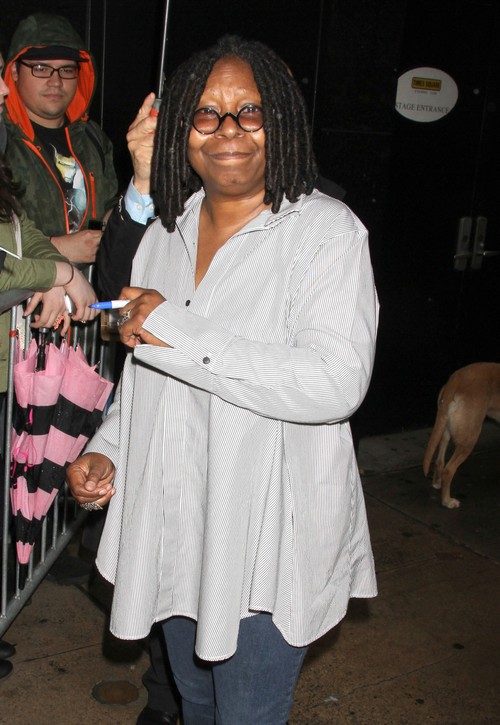 Whoopi Goldberg strikes me as one of those women that is fairly tolerant and just kind of goes with the flow, but when she’s done with a situation – she’s totally done. Apparently that is Whoopi’s feeling towards ABC’s The View. Whoopi recently inked a four year contract with the show and had regret almost instantly. First the network forced out Jenny McCarthy and Sherri Shepherd, whom Whoopi Goldberg mentored and then there was the screening of potential replacements.

Whoopi is simply sick of all of the nonsense and drama surrounding The View and she wants the freedom to do other projects. Rosie O’Donnell is difficult and rude and Whoopi finds Rosie strident and ignorant. Whoopi was hoping for a person of color to replace Sherri and was disappointed. Even worse, Whoopi considers herself the senior member of the panel and is in a fierce rivalry with Rosie over who will be the moderator when the season 18 of The View commences!

According to the Sept. 1st print edition of The National Enquirer tension is so bad that when an audience member had asked if Sherri was leaving the show Whoopi chimed in that she wished it was her instead! ABC’s honchos were absolutely furious that Whoopi would dare to make a comment like that even if it’s how she actually felt.

Whoopi has also been very vocal about her dislike of Barbra Walters. At one point Whoopi has said, “I’ve been working with a cranky 85-year old woman who’s been mad about everything for two years and I need a break.” Walters actually retired last May but Whoopi’s breather was short lived because the cast changes came shortly thereafter. I think the best thing about Whoopi is the fact that she is such a wild card and will say what everything else is thinking. Do you guys think that she will survive another 4 years with The View or will we eventually see Whoopi Goldberg just walk off set and not return? Tell us your thoughts in the comments below!