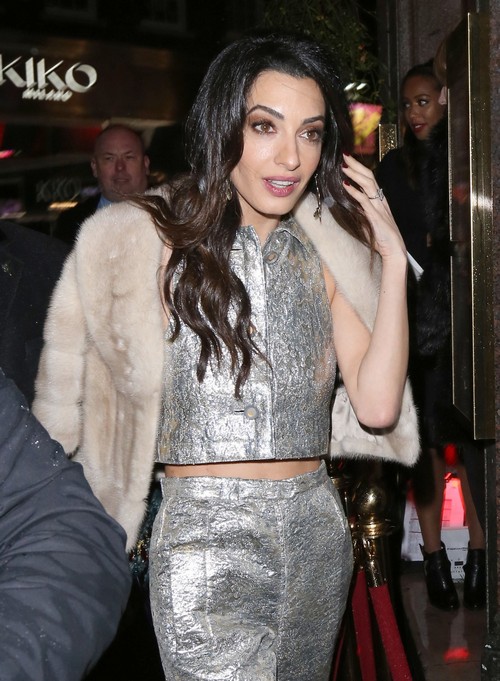 Will Amal Alamuddin file for divorce? Cindy Crawford recently dished about a nearly naked encounter she had with George Clooney. Allegedly this revelation has Amal completely freaked out. Has there been buzz that Clooney wishes Alamuddin were as gorgeous as Crawford?

Is there trouble in newlywed paradise? If George is comparing Amal to Cindy is it because the actor finds Alamuddin unattractive? Who would blame Clooney, or anyone else for that matter, for commenting on Crawford’s flawless good looks? Cindy is stunning even without make-up – the model has posted selfies of her “dare to go bare” face all over social media.

What nearly naked encounter took place between George and Cindy? Crawford recently dropped by for an interview with Conan O’Brien. Cindy explained hubby Randy Gerber and best buddy George used to hit the bars from time to time during Clooney’s bachelor days.

Making a long story short, Cindy stumbled into the guest bedroom and thought the drunk guy passed out in the bed was Randy. It was George, who ended up seeing a little more of Cindy than she preferred.

If you saw a little more of Cindy Crawford than the super model preferred most likely there’s going to be a bit of comparison to other women going on! And after a couple of glasses of wine over dinner Randy, Cindy and George probably laugh about the incident. Clooney may just mention from time to time Cindy is a very, very, very beautiful woman. But does that mean George thinks Amal is ugly?

Randy and Cindy have been married nearly 15 years and we can guestimate Gerber is pretty secure and can handle the comments. But Amal and George haven’t even been married a year, and all this talk about Cindy’s looks could have Alamuddin wondering if Clooney is going to stick around.

Can you blame George Clooney for comparing Cindy Crawford’s beauty to Amal Alamuddin’s? The actor, director and producer may have made the comparison but, Crawford is happily married to Randy Gerber, Clooney and Gerber are best friends, and Amal needs to calm down.