Amal Alamuddin a ‘Wife From Hell’ – Does George Clooney Want Out Now? 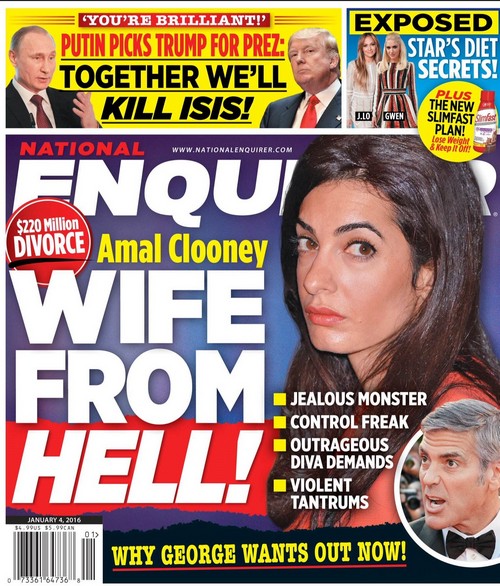 Is Amal Alamuddin a ‘Wife from hell’ – is she turning out to be a controlling and jealous wife, creating a total nightmare for George Clooney? George has reportedly been forced to cut off some of his best friends in order to please Amal.

To make matters worse, Amal Alamuddin is also making Clooney sell off some of his favorite vacation homes because he used to bring other women to them before meeting Alamuddin.

Amal Alamuddin is allegedly not the woman George Clooney thought she was when he married her. The January 4, 2016 National Enquirer claims that Alamuddin has really put her foot down and refused to accept Clooney’s close friendship with Rande Gerber and his wife Cindy Crawford.

Despite all of George’s attempts to bring the two couples together, Amal reportedly cannot stand Gerber and has complained that Cindy Crawford is uninteresting. In order to please Amal, George is reported to be distancing himself from his long-time friend and business partner.

Clooney and Gerber are incredibly close, like brothers. So when Alamuddin refused to even be civil when her husband’s best friend is around, it caused some major issues between the two old buddies.

Now it looks like Amal got her way and drove a real wedge between George and Rande because they probably won’t be neighbors in Cabo for much longer.

George Clooney is reportedly selling the vacation home that shares a border with property owned by Rande Gerber.

A National Enquirer insider said, “Amal hates the thought of living with the ghosts of his girlfriends past.” That’s why Alamuddin is forcing Clooney to sell of several of his former bachelor pads. Amal knows that George Clooney had several girlfriends who enjoyed the same amenities she does now and that bothers Clooney’s controlling wife.

Now that the Cabo San Lucas vacation home is for sale, Clooney’s pals expect Alamuddin to start campaigning to get rid of his Lake Como mansion too. Amal wants to get rid of the places where George brought other women and replace them with homes the couple has purchased together.

Unfortunately for George, Amal also wants to fill their current home with her own family. Nothing is worse for an already-struggling marriage than moving in the in-laws. Amal Alamuddin’s mother has reportedly moved into the couple’s $16 million English manor and Clooney can’t stand it according to the National Enquirer.

Baria Alamuddin is “pushy and high maintenance” the tabloid claims. Apparently that same attitude has rubbed off on Baria’s daughter. Maybe if both women would lighten up a bit and let George Clooney be himself then his marriage to Amal wouldn’t be in danger as NE claims.