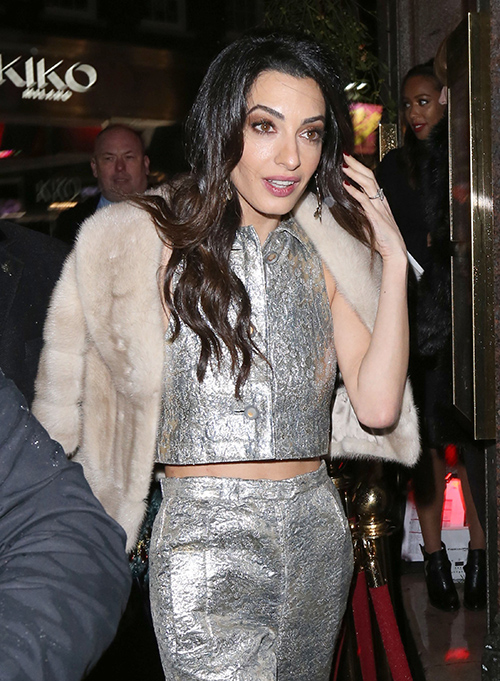 More Amal Alamuddin divorce drama? Amal might be facing a career crisis after the Greek government rejected the barrister’s recommendations in a very important case. George Clooney’s alleged demands on Alamuddin to get pregnant and be the perfect Hollywood wife probably aren’t making Amal’s life any easier either.

Confidantes claim Amal spent some time in London recently after Greece decided to drop its case against the British government over the Elgin Marbles. Insiders revealed to OK! that Amal was downing vodka cocktails and gulping down wine, complaining that life with Clooney isn’t as wonderful as outsiders think. Is being married to George becoming Amal’s worst nightmare?

After 15-months of wedded bliss Clooney and Alamuddin could be headed for divorce. Especially if George doesn’t stop pressuring Amal about starting a family. Insiders maintain Clooney’s demands that Alamuddin be at his beck and call and Amal is not able to do that – right now her career is just as important to Alamuddin as the marriage.

A source said that Amal was awfully tipsy during the London girls-night-out. Alamuddin’s complaints about her marriage troubles just started spewing out. “[Amal] was crying and drinking like a fish. [Alamuddin] never used to be like this.” The friends believe Amal was grateful to be back in Britain and away from George and the glaring Hollywood spotlight.

Apparently, George Clooney has very high expectations for Amal Alamuddin as the spouse of a megastar. The source continued, “George just expects [Amal] to be at his side. [Alamuddin] doesn’t have her own life anymore. She’s living in [Clooney’s] world now.”

The couple is allegedly fighting constantly because it has been difficult for Amal to get pregnant. George thought he would be a daddy by now. Those in the know say Amal wants to be a mom, but also desires an identity separate from being Mrs. George Clooney.

Will George force Amal to make a choice between marriage and family and her career? Can Amal Alamuddin have both?