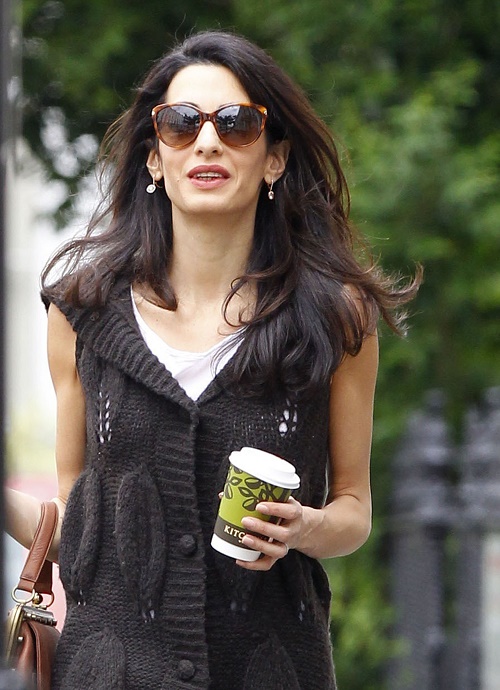 George Clooney’s wife, Amal Alamuddin, has frowned on the Hollywood scene and ordered her husband to stop hanging out with his celebrity pals. Since Amal made her debut as George Clooney’s wife she has looked down on the celebrity scene – and made it pretty clear she was not a fan of red carpet events. But it turns out that Amal Alamuddin is just as vain as the rest of the A-Listers. Although she might not want to admit it, she is very worried about what George Clooney’s celebrity pals think of her – and she has been going out of their way to impress the.

According to a new report from OK! Magazine, Amal Alamuddin has now hired her own personal stylist. OK! Magazine reports, “The willowy human rights attorney has hired a covert glam team to upgrade her everyday look.” An insider dished, “She hired an ex-Vogue staffer as a style and media consultant. Now the team is set on helping Amal hone her own individual style – which George once called ‘eccentric.’”

Ironically, the news of Amal’s glam squad came about just a few days after reports that Clooney’s wife had undergone plastic surgery, and amidst rumors that she was starving herself and borderline anorexic because she wanted to appear slim when the paparazzi snapped photos of her.

When George Clooney married Amal Alamuddin, the human rights attorney acted as if she was above celebrities – and her law degree made her superior to their Hollywood shindigs. But it sounds like Amal is just as obsessed with her image and appearance as the rest of the celebrities and she hasn’t even been married to George Clooney for a year and she is becoming barely unrecognizable.

Do you think that Amal is changing herself for George? Or did she just catch the celebrity bug? How much longer until you think she ditches her career all together and becomes enthralled in red carpet events and A-List parties? Let us know what you think in the comments below!