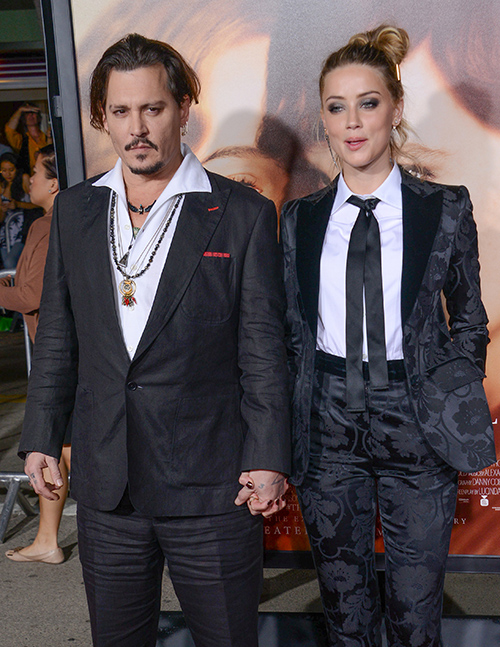 Is Amber Heard’s friendship with James Franco making Johnny Depp jealous? A brand new report says yes and Amber’s insecure husband wants her to cut ties with Franco because Depp thinks the friends are getting a little too close for comfort.

Amber starred alongside James Franco and Seth Rogen in Pineapple Express back in 2008. Since then, Amber and James have remained great friends. They even paired up again for 2014’s Adderall Diaries after staying in contact for years.

An OK! Magazine source claims Johnny is really worried about Amber’s friendship with James and that he wants her to end it. Depp can see that James Franco is just a younger version of himself. He doesn’t want his much younger wife to end up getting romantic feelings for Franco and then ditching him for her supposed friend.

“James wants Amber to star in one of his movies, and Johnny went off the deep end when he saw friendly texts between them,” the source dished. “Amber says it’s innocent, but he’s more paranoid than ever.” Should Depp worry that his wife might stray with James Franco? It’s kind of hard to believe Franco wants Amber Heard to star in his movies because of her extreme acting talent. There has been talk of a Pineapple Express 2, so maybe the whole thing is innocent and she’s just coming back to play the girlfriend again?

That’s probably not the case though, since Seth Rogen confirmed back in November that Sony just isn’t interested in making a sequel to the stoner comedy. That means maybe Depp should be a little nervous and question James Franco’s intentions if he’s trying to give Heard a starring role in something else.

Depp knows he’s not getting any younger and his 29-year-old wife is bound to get bored. Once the novelty of being Johnny Depp’s wife wears off, Amber might look to someone else. That’s when the allure of a younger version of the Hollywood icon may appeal to Heard. Will Amber Heard eventually dump Johnny Depp for a fling with Franco?