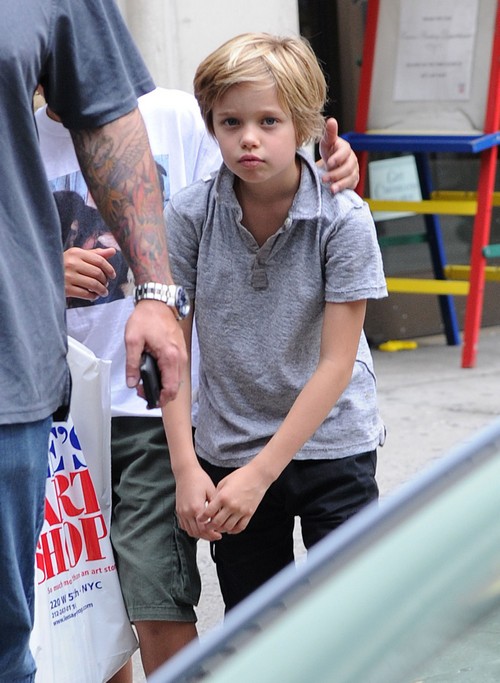 Amber Rose has gone and committed a huge social gaffe by praising Brad Pitt and Angelina Jolie for raising a ‘trans’ kid, a.k.a. she just suggested that Shiloh Jolie-Pitt is ‘trans’. If Angelina Jolie and Brad Pitt actually cared about who Amber Rose was, they might be incredibly insulted by this. As it is, Amber’s words are already causing a huge furor among the transgender community, but I doubt either Angelina Jolie or Brad Pitt will respond to this.

Amber – no doubt in an excellent famewhoring effort – took to Instagram to post a picture of Shiloh Jolie-Pitt in a men’s suit and tie, captioning the photo, “How gorgeous is John Jolie Pitt? Born into the perfect family for him.” Um…. ok.

If that wasn’t bad enough, Amber then added the hashtag #TransKids at the end of the post. And while Angelina and Brad have been extremely open about Shiloh’s desire to dress like a boy and act like a boy, they have never, ever commented on Shiloh being transgender or otherwise – and they shouldn’t have to! Shiloh Jolie-Pitt is only 8 years old, and she was thrust into the spotlight because of her famous parents, not because of what she’s done or the clothes that she likes to wear.

Plus, the media is not completely faultless in this, even though they’ll be the first to vilify Amber Rose for calling Shiloh ‘trans’. The tabloids have been snarking on Shiloh’s clothes and gender-neutral haircuts since she was a toddler, and they’re probably the reason that Amber even thought that Shiloh was trans to begin with. Then again, this could have been a fairly transparent attempt to gain some publicity, in which case, it worked.

What do you guys think about Amber Rose’s comments? Is she just being a complete moron, or a complete attention-seeking famewhore? Let us know your thoughts in the comments below.