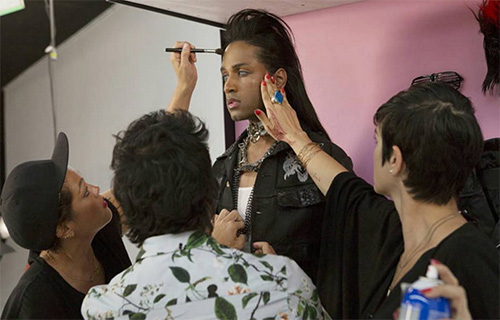 America’s Next Top Model cycle 22 revealed tons of drama as the rivalries began changing and boiling over. We have an ANTM exclusive interview with eliminated models Bello Sanchez and Courtney DuPerow, both of who reveal their ANTM secrets. CDL also has a full recap of America’s Next Top Model season 22 episode 8 right here. Don’t forget to keep checking CDL for all your ANTM cycle 22 needs and wants!

CDL INTERVIEW WITH BELLO SANCHEZ: Bello, you were always one to voice stronger feelings and didn’t back down when it came confrontation. Do you think your tendency to take things head on helped or hurt you in the competition?

“Both, honestly. I was distracted by coming into defend others. Having a strong voice and using it to stand up for others instead of myself hurt when I needed to focus on myself. But I’m passionate and I’m never going to stop being me. It’s my truth and I’m happy. That’s what matters.”

Bello’s story is nothing short of amazing. After moving to L.A. at the age of 19, Bello started with just $200 and living in Skid Row. Eventually, after auditioning for ANTM on several occasions, he was discovered and cast. How much of your strength comes from your past and drive?

“Everything comes from who I am and my past. It’s true, I came to Los Angeles with $200 and that quickly became $100, but I knocked on every door with a rental sign on it promising to pay the moment I had a job. I lived up to that and had a job the following Monday. I went knowing I would never go back and I wouldn’t even look back. I was so ready for the journey, and it reminds me of Cinderella. Would she have ever been a Princess if she went back for her shoe? No! I feel like I get undeserved praise for doing this, because it’s something that so many other people from every race and creed have done. My mother even made the same journey. Mexicans, Africans, so many people from various backgrounds and situations do it every day, and I get the praise because of television. It’s definitely put things into perspective and I will just say that I’m not done yet!”

Bullying wasn’t just a part of the show, it was a part of your past. What advice to have for those trying to endure the same treatment?

“This might be controversial, but my advice is – BULLY THEM BACK! I’ll use the hashtag #BullyABully because I take a realistic view. Telling a parent or teacher is an ok start, but realistically it won’t help. I lived through it at school and asked for help, but kids would follow me home from school and bully me. Finally, I stood up for myself and used my voice. So, I’d say, defend yourself – without question. Tell them, “Not today!”

How did the rift between you, Mikey, and Devin begin? Is it water under the bridge now, or just something you are ready be done with?

“It came from not minding my own business. I defended others and got involved where I should have minded my own business. For example, I was always there to stand up for Hadassah, but viewers saw her just stand there when it came time to stand up for me. Hadassah wasn’t there despite the fact I always stood up for her. I’m not going to stop defending people, but I learned from that situation. I think Mikey was genuine when he offered the olive branch and talked to me about the situation. It’s not even water under the bridge – it’s a desert. I don’t even think about it. We’re good.”

Modeling is about so much more than just being beautiful. What would you say is your biggest modeling asset outside of being photogenic and attractive?

“The fact that I feel. I feel a lot! Some will say they are passionate, but I’m very passionate. Even when it is not in my best interest, I’m myself and I will never back down from being myself. I’m always sympathetic, but I am passionate about every moment.”

The end of the episode was tense! How are you feeling now and what’s next for you?

“Now, I can breathe! Being out of the situation has been refreshing in the sense that I can process and deal. Being on America’s next Top Model has given us all this huge platform, and good things are happen. Don’t rule me out! I will be back, you have to stay tuned!”

CDL INTERVIEW WITH COURTNEY DUPEROW: What has the ANTM experience done for you on a personal level?

“It’s a long story, but when I was younger, I was bullied. I’ve wanted to be a model for a long time, but I didn’t have the confidence because I was bullied. The show has given me a boost in what I can do and given me that confidence that I needed. It challenged me and gave a lot of ‘firsts’ like first photo shoots and runways. Now those firsts are done, I feel so much more empowered and I’m finally confidant. I can’t wait to do magazines and I’d love to do a runway show, but at my height it will be challenge I’d love to try.”

There was definitely some struggles for you throughout the season. What would you say was your biggest challenge?

“I have muscle spasms that are a problem. My shoulders twitch and having to do crazy positions and challenges were actually painful. I don’t want anyone to feel sorry for me or pity me, so I power through, but that was the challenge for me personally.”

You sought solace in Mikey and a few others, but Mikey seemed to capture your heart. What was is about him that drew you in so deeply?

“He was the first to comfort me in any way. I wanted a close friendship, nothing more, with Mikey. Everyone wants friends to turn to and lean on. I was in a house full of people, but I slept on the sofa downstairs most of the time because I kinda became a lone wolf. I just wanted to have a close friend and after living with a house full of these people, Mikey was the one who tried to comfort me first.”

What challenge or moment did you feel captured your best moment or showed who you really are?

“The Vine challenge didn’t go well, but it was a moment that spoke to me. It was like my life of being bullied defined in the challenge. We tried to use an inside joke the girls didn’t get, which was a mistake, and the video we filmed was deleted, but the power theme was a personal moment for me.”

What do you hope viewers and people in general take away from your time on ANTM?

“I hope people take away the fact that no matter what you look like or what your circumstances are, you can accomplish anything. I’m very short for a model, but I take a no excuses mentality when it comes to trying. Look at Nyle. He hasn’t let his circumstances stop him. Nothing should you hold back and never let the voice in your head bring you down. I struggled with letting that voice bring me down in the show, but I’m so much more confidant now.”

I also loved the moment when you comforted Nyle after Devin took his only way to communicate away so he could take selfies. Why did you feel in the moment?

“My mom taught me to be caring. I was very sheltered growing up. I was raised in a loving home, and until I was 19, I didn’t really live. However, I know that you don’t get anywhere by being rude. Like with Ava, it was never my intention to spread drama. We were close, like sisters, and I had to tell her about DMA’s comments on her picture (after she won the Tyra suite). I had to get it out and couldn’t keep something like that from her.”