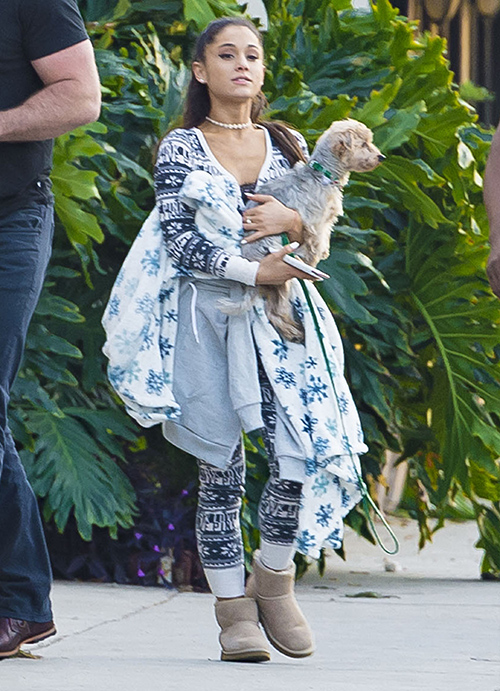 What is going on with Ariana Grande? The pint-sized diva and donut-hater shocked everyone by cancelling the rest of her concert dates out of nowhere – leaving a ton of disappointed fans who hoped to see her perform live. What was even stranger is that Ariana Grande offered up no explanation. The least she could have done was offer up some sort of half-hearted excuse about being exhausted or “needing a break.” Nothing but crickets.

Some fans speculated that Ariana Grande might be sick – but the singer looks perfectly healthy (sort of) in the photos that hit the internet of her walking her dog on December 10. No one seemed to notice the dog though – everyone was too interested in what was going on with Ariana’s face? Social media began buzzing about Ariana’s new look, and whispers of plastic surgery swept the web.

In the photos of Ariana Grande walking her dog, she is barely recognizable. The singer looks like she aged 10 years, and her skin is pulled so tightly around her eyes that she appears to be squinting. By far the strangest part of Ariana’s new face is her mouth. It almost seems as if her skin is pulled so tightly that she can’t close her lips. Or perhaps she got fillers, but only on the bottom and not the top?

Regardless, something is definitely up with Ariana Grande. Rumors are floating around that she looks like she may have gone through a round of bad plastic surgery. If that is the case, that would totally explain why she cancelled the rest of her tour without any explanation. How embarrassing would it be if she had to tell her fans that she was scared to get up on stage because of some botched plastic surgery?

What do you guys think is going on with Ariana Grande? Did she cancel her tour because she wasn’t happy with her plastic surgery? If she didn’t get plastic surgery, then seriously…what is up with her face? Let us know what you think in the comments below!