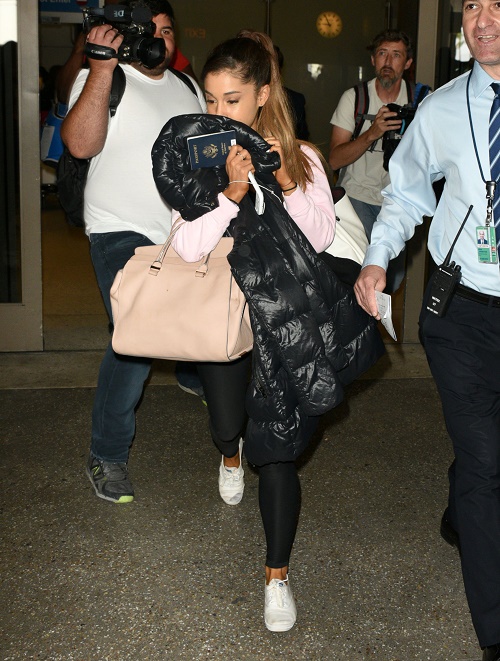 Ariana Grande loves the USA, just ask her. The pint-sized diva is trying desperately to repair her image after the 4th of July fiasco at Wolfee’s Donuts in California. Ariana was caught on tape saying that she “hated America” and then spitting on donuts that customers later bought…and ate. Gross! Of course, getting caught slamming the United States is career suicide for any celeb, but on 4th of July of all days – it really doesn’t go over well.

Ariana Grande issue an apology on Twitter, and tried to retract her statement by saying she loves the United States, she just hates how fat our country is. It wasn’t exactly oozing in sincerity, and she just upset more people in the process. She issued a video apology a few days later, by then the damage was already done – and no one really cared.

Ariana was already having a tough time selling out her concerts before the donut licking scandal, so frankly we’re shocked anyone showed up to her show in Tampa. But, hey, they were practically giving tickets away at just $16 a pop so it was probably cheaper than going to the movies. Grande took the stage and continued to try and repair her image and announced that now she loves America. Really? Last week you hated America because we were too fat, but now it is the “greatest country on earth.” We’re not buying it. Seriously, could she be any more obvious?

On Thursday, July 16 during her Tampa concert Ariana Grande addressed the crowd and thanked them for coming. The singer shouted, “I’m so grateful to be here in Tampa. And I’m so, so grateful to be here performing in the U.S.A. — the greatest country in the world! I love you guys so much.” The 12 year old in the audience may have forgiven Ariana Grande – but we haven’t. Do you think that Ariana is being sincere? Or just trying to clean up her image? Let us know what you think in the comments below!