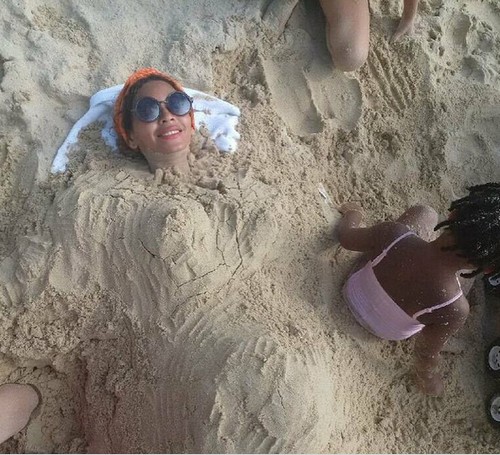 Beyonce and Jay-Z’s divorce is reportedly on hold – because Beyonce is pregnant with baby number two according to a new report. Just last week In Touch Magazine broke the news that Jay-Z and Beyonce had finally thrown in the towel on their sham of a marriage, however the couple has reportedly had second thoughts about splitting because they just found out they have another baby on the way!

This week’s edition of In Touch Magazine reveals that the divorce is on hold, and Beyonce and Jay-Z have been in Italy on vacation together trying to repair their damaged relationship because they want to keep their family together, and have Blue Ivy and her baby brother or baby sister raised by both of them. An inside source close to Bey and Jay dished to the tabloid, “Right when she made up her mind that she was finally leaving Jay, within days she found out that she is pregnant. She took two home pregnancy tests and both came back positive.”

Beyonce thinks that the pregnancy is a blessing in disguise, and it might inspire her husband Jay-Z to finally change his ways. Because you know, having a baby to save a relationship always works out. So far, the baby news seems to be putting a temporary Band-Aid on their marriage woes. When Jay-Z learned about the pregnancy he began spoiling his wife, and whisked her away on a romantic vacation. According to In Touch Magazine, Jay-Z has even begun going to couple’s therapy with Beyonce again, and seems to be making a valid attempt to work on their marriage and fend off a divorce.

The tabloid’s insider reveals that so far the pregnancy has taken Beyonce through the ringer. The source dished, “She is having a pretty rough pregnancy so far, with pretty bad morning sickness. It has been emotionally trying as well.” But, over all Beyonce is thrilled by the baby news and is certain that her marriage to hubby Jay-Z is on the mend. What do you guys think? Is Bey really pregnant? Will Blue’s baby brother or baby sister save the music moguls’ marriage? Let us know what you think in the comments below!