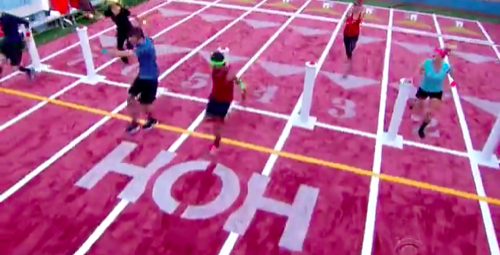 Tonight on CBS Big Brother 17 airs with an all new Thursday August 23, season 17 episode 27 called “Episode 27”, we’ve got your recap down below! On tonight’s episode nominations for eviction are revealed. Check out our POV winner spoilers here and our Vanessa spoilers right here.

#BB17 picks back up with the #HOH competition. Meg is out and sitting with Liz. Julia twitches and gets off one buzzer and she’s out due to a false start. Now they stretch out and reset. Vanessa cramps up and is out too. It’s down to Austin, John, James and Steve. Finally it’s a go and they all run and John hit his button last so he’s out. He says he can’t believe he was beat by mathlete Steve.

John is upset since he wanted credit for kicking Vanessa out of the house. Now it’s James, Austin and Steve. Steve is out when his hand slips. Now it’s James and Austin. Vanessa is rooting for Austin since she’s worried that James might make a big move. Liz offers Austin a smooch if he wins. Austin’s Judas wants to win this so he can have time with Liz in the HOH room. Austin wins it.

Austin now thinks if he’s going to play this or if Judas will. He wonders if it’s time to betray Vanessa. Liz says she’s glad they’re still in power but is worried about getting more blood on their hands this week. Austin comes in and they all dance around. Steve comes in and high fives him – Steve is feeling safe this week and thinks this a win-win for him.

Austin tells Liz he was thinking about throwing it to James but says he could have gone after them. Liz says Austin needs to make deals this week and he agrees. James tells Austin he’s glad he won. Austin thinks about all the alliance they have – Austin’s Angel, the Scamper Squad, with John and Steve, and then another with James and Meg. He has to decide which alliance to betray.

Austin tells James he’s going to tell people that they made a deal not to put each other up. James tells Meg he thinks they’re safe. Austin has to decide if he’s going after Vanessa. Steve and John talk and they think that James, Meg or Vanessa will be on the block. Vanessa comes and tells Austin she has plans that he will like. He smiles but Austin is thinking he won’t let her run his HOH.

Julia asks who Austin will put up and he says John and Steve or John and Vanessa. Then Vanessa butts in and says she has a complicated plan. She says John is lying to him and is very loyal to Steve. Vanessa says Shelli and Clay told her that John and Steve are planning final two. Austin acts intrigued but thinks she’s either lying or is keeping information about her activities from him.

Austin and the twins meet with James and Meg to talk strategy. He says he thinks he should put up Steve and John. He says if John did get voted out and came back, he’s less likely to hold a grudge. Meg says Vanessa has gotten what she wants every week. Austin says they can either back door Vanessa or put her up as a pawn. Austin worries about kicking her out and losing a number.

Meg says Vanessa has had a hand in every eviction in the house. Austin says he’s not sure she’s coming at him and Johnny Mac might put him up. Austin says if Vanessa keeps talking crap, he might go after her. Austin says maybe he needs to take her out. Austin says if he puts her up, it would be the melt down of the century.

Vanessa comes up and finds Steve with Austin and the twins. Austin tells Vanessa he made a deal with James and Meg as part of the HOH. Austin says they need a pawn to come from that group. Vanessa says it needs to be her or Steve but then says it shouldn’t be her and tells Steve he has to vote against Johnny Mac. Steve says the pawn thing makes him nervous.

Steve freaks out and is upset that Vanessa is pushing him to be the pawn and he wants to talk to Austin alone. Steve tells Austin that Vanessa came in the room with the idea to put him up on the block. Austin says Vanessa always comes up with last-minute information and says Vanessa told him that Steve and Johnny Mac have a final two deal.

Vanessa comes in and Steve says he’s not in a final two with Steve. Vanessa goes off on Steve and she says everyone has to be willing to be a pawn, yet she’s not. Vanessa tells then she lost sleep trying to find a way to keep Austin. Then she says that was on Austin – she blames him. Austin knows she tried to back door him and he presses her on this to get a confession.

They ask Vanessa if James threw the #BOB and she lies. Austin knows she’s lying then Vanessa asks if she can have three minutes with him alone but he says he just wants to be alone with Liz. She leaves and Austin goes off to Steve and the twins about Vanessa lying right to their faces. Austin is furious that Vanessa keeps lying to him. He says he’s stuck in the most awkward HOH of the season.

Steve goes to see Austin and grabs some snacks then asks if he needs anything from him. Austin says he has to decide to put up Vanessa now or back door her. Austin says he may have to put him up even though he doesn’t want to. He says if he puts her up now she will freak out. Steve says he would rather not be a pawn against Johnny Mac. He says to put him up next to Vanessa.

Vanessa tells them that she’s at risk of going home and that would be bad for them. Austin gets Vanessa to admit that she lied to him and got James to throw it. Vanessa starts up her crying BS and says she realized she was wrong. Austin tells her he’s just going to flip a coin between her and Steve. He puts on his Judas hat and Vanessa says she understands if he has to put her up.

Austin announces the nomination ceremony. He nominates Johnny Mac and Steve. Austin tells them he’s conflicted and quotes some half-assed philosophy. He says he should have been eliminated in week five and if it wasn’t for Liz winning, he wouldn’t be there. He says he has to think about his game and Liz’s too. He says Steve and Johnny Mac weren’t part of that but their victims like him.

James thinks it’s the craziest nomination speech. Steve wonders what Vanessa did to keep herself off the block today. John is not happy to be up against someone else he doesn’t want to send home. Vanessa is shocked and grateful that Austin didn’t put her up and is certain that he’s keeping her safe. Austin says he still considering if he wants to back door Vanessa.