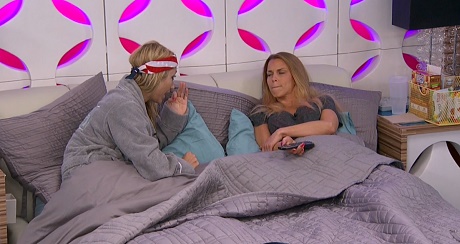 Austin was chatting with Vanessa on the Big Brother 17 LIVE Feeds about who they should put up beside James on the block. Austin is, of course, still gunning for Jeff – and that has been V and Austin’s plan all along should they need to put up a REnom, but Vanessa is still trying to think about how she can “justify” this to the rest of the house. She’s been saying over and over that she doesn’t have a real, honest-to-goodness reason to make Jeff the replacement nominee.

Austin raises a good point though: If they take out Jeff, then the “dominoes will fall” and that entire side of the house (mainly James, Jackie, and Meg) will be so rattled. The numbers are currently on Vanessa & Co.’s side, something that Vanessa should realize and should take comfort in.

Julia/Liz, Austin, Clay, Shelli, Steve, Audrey (duh), Vanessa, and possibly Jason and Becky (but who really knows what this girl’s doing) will all be on board with this plan. John probs will be, too. Really, the only ones who are going to be super pissed about Vanessa’s current moves are Jackie, Meg, and James. Austin seems to think that Jackie and Jeff have been given an incentive by CBS to work together and that’s why they’re putting on a front that they don’t like each other (i.e. they’re secretly working together).

According to Big Brother spoilers, backdooring Audrey is pretty much off the table (as it always has been), so it’s looking like one of these dudes is going home. At one point, V said she could possibly put up Jackie. Austin’s really against this. He wants Jeff. He wants Jeff. He wants Jeff. Did I mention he wants Jeff. Next, Vanessa comes up with a MASTER PLAN: Let’s call out Jeff on a lie to make him look like a target – to make him look like “Audrey 2.0.” This way, Vanessa will feel like she’s getting her hands less dirty and will be perceived as a “hero” in the house. She ran this plan by Shelli and Clay, and they, as of the posting of this article, seem to be on board.

Only time will tell what becomes of this plan – or if they even set it into motion. Do you think that this will give Vanessa the “justification” she’s looking for to make Jeff the renom?

Thanks for sticking with us during this crazy season of Big Brother. We watch the LIVE feeds so you don’t have to. Don’t forget to keep checking CDL for all your BB17 spoilers, updates, news, and gossip. Also, don’t be afraid to leave your thoughts and opinions in the comments section below.