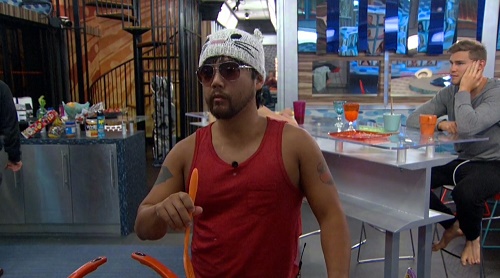 Big Brother season 17 is shaping up to be a crazy time and, thanks to the CBS LIVE feeds, there’s always fresh access to hot BB17 spoilers. Vanessa and Austin managed to become the Week 3 HOHs. They developed a plan to (hopefully) evict James and ultimately ended up putting John, James, Meg, and Jason up on the chopping block. After the Battle of the Block competition took place, Meg and Jason came out on top and managed to secure their safety, leaving Vanessa and her noms (John and James) on the block and ousting Austin as the second HOH.

It’s no secret that Vanessa is gunning for James this week, despite the fact she has been broadcasting a very different plan to those who aren’t part of her alliance: vote out Audrey the Wild Child, quite possibly the craziest and emotionally unstable (or ingenious) person in the house at the moment. Audrey sort of has a weird relationship with Shelli and Clay’s clique and, even though nobody is fully trusting of the Wild Child, they seem to be keeping her around because they know she’ll always be the loose cannon that’d go home over them.

Unless Audrey starts winning competitions and establishing herself as a dominate power in the house, she might not have much longer to twist the words of her fellow houseguests. According to the live feeds, though, people are on their last straws where Audrey’s concerned.

If Vanessa’s plan to evict James doesn’t work (i.e. he miraculously wins the PoV), then she plans to target Jeff next. Most of the house seems to be on board with this plan of attack. Really, the only way for both James and Jeff to stay would be for Jeff to take home the PoV and then use it to remove James from the chopping block. But, let’s be real, this ain’t gonna happen. The Power of Veto competition is scheduled to take place later on Saturday. So be sure to keep checking CDL for all of your latest Big Brother spoilers, news, gossip, and updates.

In the meantime, enjoy some of these highlights from the LIVE feeds Saturday, July 11.

12:43 PST — James is cooking himself some eggs. Clay and Shelli are also in the kitchen. Clay asks why the show is called “Big Brother.” James says, “Because he’s always watching.” Clay says, “OOOOOhhhhhh.” He’s being serious.

12:45 PST — Jeff starts eating in the kitchen, too. He says that he doesn’t think John will win the PoV today. Jeff has a feeling that James is going to win. Interesting. For his sake, I hope he does win. Because it’s probably the only way he’ll remain safe with Vanessa’s plan in motion.

1:00ish PST — Vanessa, Austin, and Vanessa are chatting in the HoH room. They have a pretty solid bond. Vanessa is trying to help Liz/Julia with their whole Twin Twist act. Austin goes to the bathroom but, before he does so, he says he wants to get Jeff out so bad this week. Vanessa cools his jets. She says James is the bigger threat right now.

1:00ish PST — Audrey comes up and, as always, she’s eager to discuss game. She asks what Vanessa will do if John wins PoV. She says then she will be putting up Jeff. Audrey asks if this is a good idea. V says that if she were to put anyone else up beside him then they could possibly go home. Audrey will be playing in the PoV Comp and she throws out the idea of possibly using the PoV on John if she wins. V says that she doesn’t want her to do this and, if she were to do this, she’d consider it a betrayal. Straight up.

1:10 PST — Meg told Vanessa that Audrey told her that she was trying to flip the house. Audrey’s saying that this is completely false and she wants to squash this. They want to go get Meg to have a chat in the HoH room. V says she wants to trust Audrey soooo bad because she feels comfortable talking to her about stuff.

1:15ish PST — Meg’s not going down easy. She’s not backing down. She keeps saying, “WHY WOULD I MAKE THIS STUFF UP!?” Vanessa asks Meg, “Are you 100% sure?” V says that she’s not trying to call anyone out as a liar but that she’s genuinely trying to understand what’s going on.

1:20 PST — Meg starts crying. She breaks down. She doesn’t know what else they want her to say. She knows that Audrey told her to watch out for those people. That’s what she heard and she’s sticking with it. This is whole mess.

1:30 PST — Vanessa gets to a point where she feels as if she understands the source of the misunderstanding. Meg leaves the room. V says that she doesn’t judge her at all for this. She gets it. V says she’s not mad and that she genuinely believed them both.

1:37 PST — Meg goes to vent to Shelli, Jeff, James, Clay, and Jason about the “conversation” she had with Vanessa and the situation with Audrey. Meg says that she’s just lying out of her mouth like always and that it’s not worth confronting her anymore about it.

1:57 PST — V is SOOOOO excited to get rid of James and she can’t wait until the Veto ceremony. She’s gettin all pumped up for the speech she’s planning on making. She’s called out of the room by Production.

2:16 PST — Julia and Austin grow closer and talk about all the variations between her and her sister, Liz. Julia says that, at the next Twin Switch, she’s going to tell her sister to stop associating herself with James and Jeff.

2:49ish PST — Clay, Austin, Vanessa, Julia, and John are trying to figure out what kind of competition the upcoming Veto Competition will be.

3:25 PST — V tells Clay that she’s SO happy about the position she’s in with Clay and Shelli. She thinks their partnership is really solid and it’s built on a lot of trust. She also thinks they are in a good spot with Audrey. Clay says that it’s important they don’t trust her 100% though, and V says, “Of course not.” Clay continues to make it known that he doesn’t trust Audrey “any percent” but that it’s advantageous to keep her close and keep her thinking that she’s closer to them than she actually is. Next, they talk about possibly bringing Johnny Mac into a side alliance.

3:30ish PST — The LIVE feeds stop. The Houseguests are playing the Veto Competition right now. We’ll be able to figure out who wins when the feeds return.

5:30ish PST — We learn Johnny Mac, Destroyer of Competitions, has taken home the PoV. Not the most ideal scenario for Vanessa’s game, but not the most horrible either. He will obviously use it to remove himself from the Block, forcing V to make a renom.

5:45 PST — Austin and V are discussing things. V is stressed out now because she needs a plausible reason, one rooted in some evidence, to make Jeff the renom. She won’t be putting up Audrey; that’s highly unlikely. She says that she just prays she’ll have some time to think on it. Austin says she will, as she probably won’t have to make a choice until Monday. We’ll see!

That’s it for this round of highlights. Make sure to check back here periodically for more BB17 LIVE Feed Highlights!