Big Brother 17 Spoilers: Vanessa Moves Forward With Operation ‘Evict James’ – Prepares For Backlash From The Anti-Audrey Side Of The House? 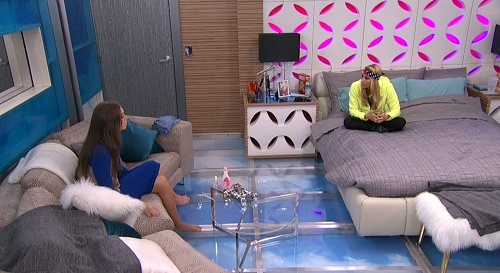 Big Brother 17 is coming at us with full force and, as we all know, there is a certain amount of deception that must be used when playing the game. The best Big Brother players, however, try to minimize this deception. They will do their best to lie only when they have to and burn bridges only when absolutely necessary.

There have been many questionable strategies on Big Brother season 17 (ahem, Audrey Middleton’s “Lie” tactics), and some houseguests’ approaches have left us a bit puzzled. Currently, Austin and Vanessa are working on a plan to backdoor James. While their approach is not particularly bad right now, in my eyes, they’re executing it poorly. They are lying for no good reason. This, of course, is just one observer’s opinion.

This is particularly going to be tough for Vanessa because she is the one pulling the trigger. As the reigning HoH, the lie will be traced back to her when the house figures out that she is not backdooring Audrey.

Many of the houseguests know the plan, but the ones that they lied to are going to be pretty ticked off – because they absolutely DESPISE Audrey and want her gone now. John might be particularly surprised; he was used, once again, to throw the Battle of the Block competition. John has been used constantly as a pawn and he probably would’ve been nervous about agreeing to go up on the block against anyone other than Audrey. When he finds out that James is the real target, he is bound to be upset.

What is more odd is the decision to lie in the first place. John was lied to because, I’m assuming, Vanessa suspected he would not have agreed to be Pawn under any other scenario. But why lie to the others? Why make them think they are getting out Audrey when, in all actuality, they aren’t? All this lying and deception is going to make them angry and even less trusting than they already are with Vanessa. Do you think this professional poker player is about to be called out on her bluff? Big Brother spoilers via the CBS LIVE feeds indicated that Vanessa, in light of John’s POV win, is now scrambling to find an excuse she can feed to the houseguests when she chooses to nominate Jeff over Audrey.

Do you think choosing to leave Audrey in the house right now is the correct thing to do? Chances are this won’t hurt Vanessa to bad, but it could. Why risk upsetting so many people in the game? We will find out soon. Keep checking CDL for all your BB17 spoilers, news, gossip, and updates.