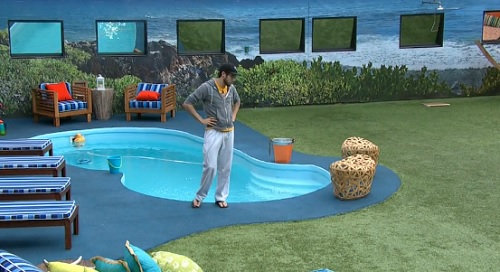 Big Brother 17 spoilers continue to zoom in thanks to the BB17 Live Feeds and, as usual, houseguests are plotting against one another. Or, in this particular case, plotting to save each other. Steve’s an interesting player this season because not only is he super smart with a great memory but he has chosen to remain on the down-low, saving his moves for a time in the game where it counts. That’s all fine and good, but he shouldn’t expect to glide through much longer – because he could be sent home before he has the chance to make any game-changing moves. People are already starting to view him as a threat, and whispers on the LIVE Feeds claim that Audrey is one of those people. But she might not be for much longer if she catches wind of Steve’s new master plan.

So why, then, is good ol’ Steve wanting to save Audrey from Vanessa and Co.’s recent (perhaps I should say recurring) plan to backdoor the Wild Child? Apparently, he doesn’t want to “save” Audrey for any other reason than to keep her around for another week so HE can be the one to evict her under his HoH rule.

His reasoning for wanting to do this is because he knows that the person to eventually defeat the Wild Child will be one of the most well-like individuals in the house. Basically, Steve-O Boy wants all the glory that will likely come with the Wild Child’s eviction. He says that if Audrey goes home under current HoH Shelli’s power, then she’ll have a great feather in her cap – and he doesn’t want her to have that victory under her belt.

Interesting. Around 6:30 AM on the LIVE Feeds, Steve was seen circulating the yard talking to himself about potential plans to shift this week’s attention onto another player, namely Meg. He thinks he can manipulate Vanessa, the current PoV winner, to help get Meg up and Audrey’s name off the danger court – but I don’t really see that happening, seeing as how Vanessa feels as if she’s been fully betrayed by Audrey.

Not sure how Steve’s going to pull off this little scheme of his; however, we might see him try to pull some strings today in the house. Here’s to looking forward and seeing if this lil’ dude can work some magic in the house. If Steve’s plan does succeed, then Audrey will have skated through to another week.

Steve really regrets not winning HoH this week. For his Operation Get All The Glory Plan to work, he’ll have to both KEEP Audrey in the house this week AND win HoH next week. One of those things will definitely be easier than the other. Do you think he has the guts, brains, and cunning to pull off this little scheme of his? Let us know in the comments section below and don’t forget to keep checking CDL for all your Big Brother spoilers, gossip, news, and updates!

Big Brother 17 Live Feed Highlights 7/19/15 (this post will be updated over the course of the day, so keep checking back often):

12:21 PST — Audrey is up and runs into Austin in the kitchen. Most of the other HGs are still asleep. They talk about how hard it is to sleep in the house, and Audrey says that she had a nightmare that Day came back! Haha.

12:32 PST — Audrey joins Clay and Austin outside in the yard. Austin and Clay are talking about their feelings/emotions regarding their showmances. They both realize that what happens in this house is like something that happens in a different world – you don’t know how it will be once you leave the secluded BB Universe. However, Austin says he’s definitely developing feelings towards Liz, and Clay is obviously smitten with Shelli.