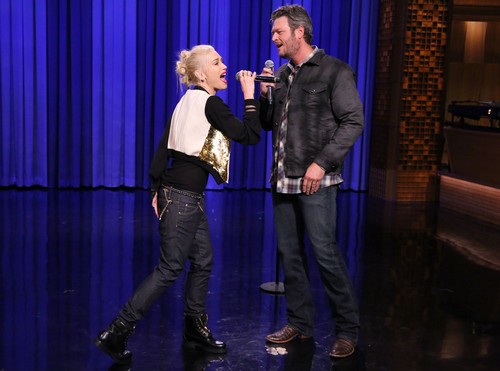 Is Miranda Lambert going to have a meltdown during her performance at the CMA’s, after learning that her ex Blake Shelton has moved on and is dating his co-star Gwen Stefani? Rumors have been hinting for weeks that The Voice coaches Blake and Gwen are hooking up, but they waited until about half an hour before the live Country Music Awards began on ABC to confirm their relationship and make an official statement. There is no way that their impeccable timing is a coincidence.

The 2015 Country Music Awards are officially underway, and everything seems to be going smoothly on stage – but behind the curtain and in the audience, all hell is reportedly breaking loose. Miranda Lambert was just completely blindsighted by the news that her ex-husband was dating Gwen Stefani.

And, now she is preparing to take the stage and perform right in front of him. Meanwhile, the producers are freaking out and concerned that Miranda and Blake could wind up having a huge blow-up once the drinks start flowing, before the night is over. After all, country music singers do tend to get a bit rowdy.

Ironically, just last month Blake Shelton was discussing in an interview how awkward the CMA Awards show was going to be this year because of his and Miranda’s divorce – they had dozens of mutual friends in the country music business. If making things awkward was truly a concern, you would think that Blake wouldn’t have flown his new girlfriend Gwen Stefani in to Nashville with him.

Do you guys think that Blake announced his relationship with Gwen moments before the show began just to rattle Miranda Lambert? How will she react, will it affect her performance? Is there about to be some major drama at the Country Music Awards?