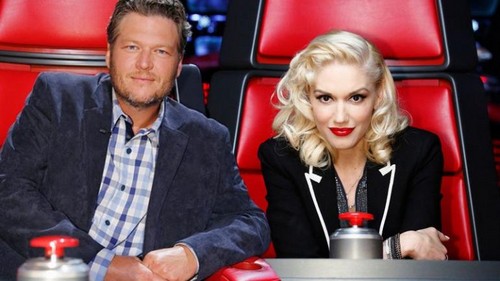 Rumors kicked off when Season 9 of The Voice first began filming that Gwen and Blake (both fresh off divorces) were hooking up and leaving the set together. But, it was such an odd pairing – it really was hard to imagine the country singer and pop diva in a relationship.

Over Halloween weekend Blake Shelton and Gwen Stefani were caught out canoodling at a costume party and holding hands! Word on the internet is that Gwen and Blake were actually sharing a hotel room too, and after a night of partying they retired to their room together.

Now, things are about to get REALLY interesting – Blake and Gwen just jetted off to Nashville, Tennessee together!

On Wednesday November 4 the Country Music Awards will air on live television, and Blake Shelton is one of the performers. TMZ is reporting, “Gwen Stefani took a private jet to Nashville Tuesday with a male passenger in his late 30’s … Blake Shelton … TMZ has learned. Blake will be performing Wednesday night at the CMAs. Gwen has no reason to be in Nashville, other than the fact that Blake is there.”

Ironically, Blake Shelton’s ex-wife Miranda Lambert is also performing live at the CMAs and is expected to be in attendance as well. Awkward! Blake and Gwen haven’t “decided” whether or not Gwen will actually go to the event with Blake – or will just hang out in the hotel and wait for him to return.

Honestly, we’re kind of hoping that Gwen does walk the red carpet with Blake, it could turn out to be one of the most eventful Country Music Awards yet!

Do you think it would be wrong of Blake to bring Gwen to a country music event where Miranda Lambert will be? How will Miranda react? Or do you think she will be bringing her own date? Share your thoughts in the comments below!