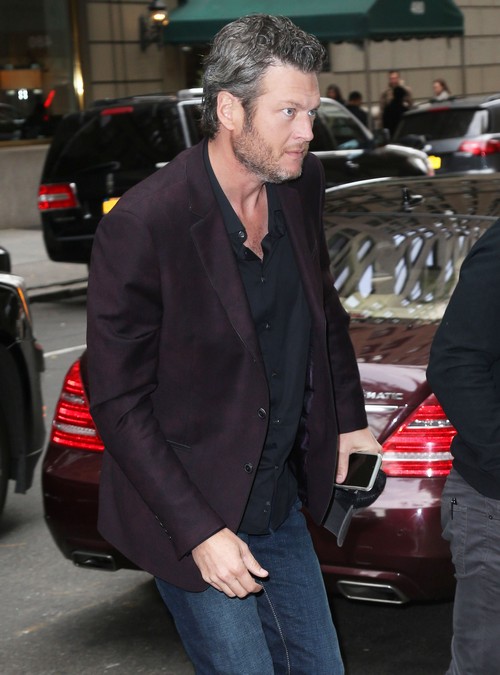 Blake Shelton, Gwen Stefani and Rihanna might be the latest celebrity love triangle as rumors swirl that The Voice star is dating both women. Blake admitted he attempted to engage the Bajan beauty in a little bit of light-hearted flirting during her appearance as a guest mentor on “The Voice.”

But the country music mega star just couldn’t get the upper-hand with the “Diamonds” singer during her visit to the NBC reality show. During a “Late Night with Seth Meyers” interview on October 27,

Blake admitted he was nervous about meeting Rihanna and tried to use his crazy wit to charm her when they met. “I was trying to get her to be flirty a little bit, I mean why not? I mean, I’m a perfect match for Rihanna.” Host Seth Meyers and Blake laughed off the comment but was it all a joke or does Miranda Lambert’s ex-husband have the hots for both Gwen Stefani and Rihanna?

Gwen and Blake have been plagued by romance rumors ever since “The Voice” co-coaches filed for divorce from their respective spouses just weeks apart in the summer of 2015. Though both have denied any romantic relationship the duo seems to lead each other on an awful lot with their playful banter. But does Gwen now have a rival for Blake’s affection? Are Shelton and RiRi the next “it couple” in Hollywood?

It’s possible that Blake realized he’s not going to get anywhere with Gwen because even though her divorce from Gavin Rossdale is final she may not be over him just yet. Stefani debuted her new song “Used to Love You” during a recent concert in New York City.

While the singer denies that she wrote the song about her ex-husband the body language in the accompanying video gives the impression that Gwen is using the song to reach out to Gavin in an attempt at reconciliation.

Blake Shelton, by his own admission, has a crazy sense of humor. Was he joking around with Seth Meyers during the interview? Or is he moving on to RiRi because he can’t have Gwen – or is “The Cowboy” dating both women and playing the field?