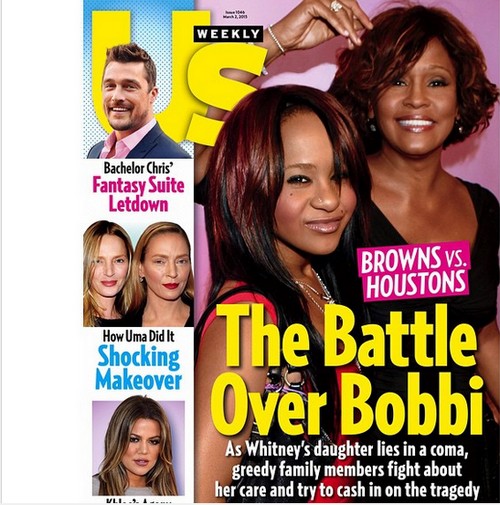 Surprise, surprise, Bobbi Kristina Brown’s family is reportedly ‘worried’ about Whitney Houston’s $20 million inheritance she left Bobbi. CDL has been saying this from Day 1, that Bobbi’s family is full of greedy, desperate money mongers who will do anything to land their hands on that inheritance. In fact, many of them have been coming out of the woodwork after years, pretending as though they care about Bobbi and her well-being. Are you telling me that every single one of Bobbi’s extended family members cares enough to spend all their waking hours in the hospital in the off chance that Bobbi will wake up?

A new report from US Weekly also claims that Bobbi’s father, Bobby Brown, is already fixated on the inheritance. US Weekly’s source claims, “He’s determined to figure out the legal issues with the money.” So basically, even though he keeps claiming that they’re not giving up and that Bobbi keeps showing positive signs of waking up, Bobby Brown knows that his daughter’s going to die and all of his words are just for show.

The US Weekly cover focuses on the battle for Bobbi Kristina Brown’s inheritance, and mentions that it’s mainly between the Houstons and the Browns. The Browns feel entitled to the money because Bobbi was the sole recipient of the entire inheritance. The Houstons feel entitled to the money because they feel it’s Whitney Houston’s legacy, and if the money’s not going to her daughter, then it should go to her next remaining kin.

In other words, the entire situation is just a giant case of greedy family feud, with Bobbi’s comatose body caught right in the middle. Even Bobby Brown is getting involved, which means that they’ve all but given up hope that she’s going to wake up. So next time they give a statement about how they’re not pulling her off life support, think about this – and then realize that everything they do is in a calculated effort to win over the public and/or get that inheritance.