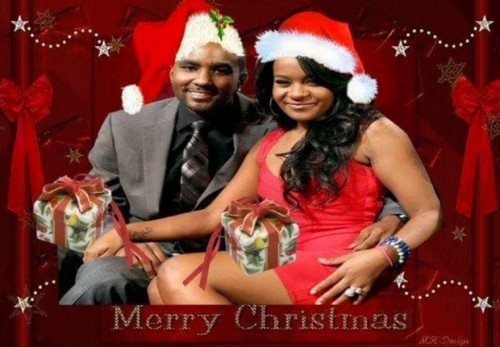 A holiday card shared via Nick’s private Twitter account wishes everyone a Merry Christmas. It looks as if Nick had a Getty Image from 2012 professionally altered. The photoshopped pic shows Gordon and Brown wearing Santa hats and surrounded by gifts. In the bottom right corner gives credit to a design company for the holiday card.

This “Christmas card” is obviously in very poor taste. Did Gordon think before posting the photoshopped pic? Is Nick seeking sympathy, forgiveness or retribution? Both the Houston and Brown families have been vocal regarding Gordon and his part in Bobbi Kristina’s death. Is this latest stunt another way for Nick to hurt the Brown and Houston families?

What possessed Nick Gordon to professionally alter a photo of Bobbi Kristina Brown and post it on social media as a Christmas card? The Brown and Houston families’ legal teams could present screenshots of Nick’s post as evidence in the wrongful death case filed by Krissy’s estate against Gordon.

The suit alleges that Nick injected Krissy with a toxic cocktail of drugs and then dragged the unconscious only daughter of Whitney Houston and Bobby Brown into the bathtub.

Krissy was found unresponsive at her home on January 31, 2015. Nick Gordon administered CPR and made the 911 call. Police reported that Krissy was alive and breathing after being transported to North Fulton Hospital in Roswell, Georgia.

Bobbi Kristina Brown was moved to hospice care at Peachtree Christian Hospice in Duluth, George on June 24, 2015. Krissy was 22-years-old when she died on July 26, 2015.

It was announced on September 2015 that Bobbi Kristina Brown’s death had become a homicide investigation. Nick is a person of interest in the murder investigation, but has not yet been arrested in connection with Krissy’s death.

Nick Gordon has done and said many inappropriate things both while Bobbi Kristina Brown was in a coma and after the aspiring singer’s death. But this photoshopped Christmas card has to be the most inappropriate act of all. Perhaps Gordon thought no one would find out about the photo because it was posted to his private Twitter account?