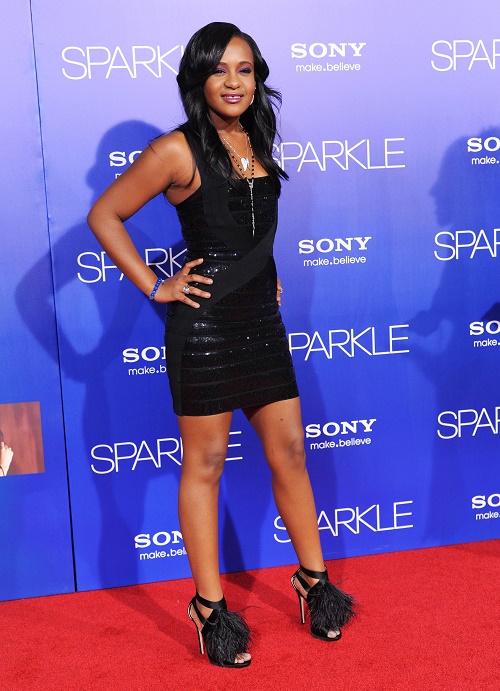 Bobbi Kristina Brown tried to drown herself in a bathtub, and is now lying brain dead in a hospital. Her family – and especially her father, Bobby Brown – is pointing fingers at everyone and everything, but most notably at Nick Gordon, Bobbi’s brother/husband. But according to a new report from the Daily Mail, Bobby Brown and Whitney Houston actually smoked crack in front of five-year old Bobbi, so really, it’s their fault that Bobbi’s in the hospital right now.

The thing is, the police found drugs in Bobbi’s home during their second sweep, so we know that Bobbi’s drug habit is at least partially [if not mostly] responsible for her suicide attempt. That also means that Whitney’s and Bobby’s drug habits played a role in their daughter’s life, and it’s not that surprising that it played out that way. Most children – especially in celebrity families and homes – take after their parents when it comes to drug abuse. The whole ‘the apple doesn’t fall far from the tree’ thing isn’t just a myth, right?

Anyway, the report from the Mail comes courtesy of of Whitney Houston’s driver, who claims that he saw Whitney and Bobby do crack in front of 5-year-old Bobbi Kristina Brown. And here everybody is, going ‘poor Bobby’, to lose Whitney to drugs and now his daughter to drugs? But really, that entire family should be held responsible for what’s happened to Bobbi. Not only did they never provide her with the love and support she needed, especially after her mother’s death, but they’re the reason she turned to drugs in the first place. Bobby Brown might get a lot of sympathy from the general public over the tragedy that’s befallen his daughter, but maybe someone should have told him not to smoke crack in front of an impressionable five-year-old in the first place.

Plus, Bobby and the rest of the family are reportedly planning to pull Bobbi off life support this weekend, which doesn’t even make sense. What’s the hurry? Apart from landing Bobbi’s inheritance, that is?

What do you guys think? Should Bobby Brown be held responsible for Bobbi Kristina Brown’s suicide attempt? Let us know your thoughts in the comments below.