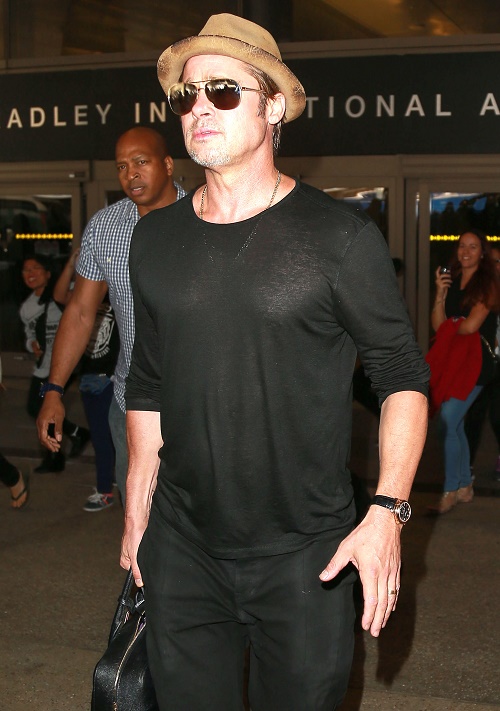 Brad Pitt and Angelina Jolie just did an impromptu week-long stint at marriage boot camp in the Ozarks, courtesy of Brad’s mom Jane. It’s no secret that Brangelina is on the fritz, and Brad and Angelina have emotionally checked out of their marriage and plan on filing for divorce as soon as they are done promoting their latest film, By The Sea. But Brad’s mom, Jane, is determined to help them save their relationship, and when they visited her in Missouri for a week, she reportedly ambushed them with some marriage counseling and urged them to try and work out their differences.

An insider dished in this week’s edition of Life & Style Magazine, “Jane believes that marriage is a life-long commitment and that all problems are fixable. She came down really hard on both of them for not trying hard enough. She told them that a lot of the problems that they see as insurmountable – like career conflicts or fighting about where to live, are rich Hollywood problems. Both Brad and Angelina were embarrassed when she called them vain and selfish.”

Apparently, Brad’s mom Jane thinks that by the end of her birthday week in the Ozarks with her son and Angelina she may have actually made some headway with the couple – now “the ball is in their court.” We totally get where Jane is coming from: marriage is supposed to be sacred and all that. But to what end? If Brad and Angelina are not happy together, then are they just supposed to be miserable together forever? Yes, they have six kids to raise, but staying together is not always the most beneficial thing for the kids – if you are fighting all the time.

What do you guys think? Will Brad and Angelina get a divorce when they are done promoting their new movie? Or will they follow Jane’s advice and work out their issues? Let us know what you think in the comments below!