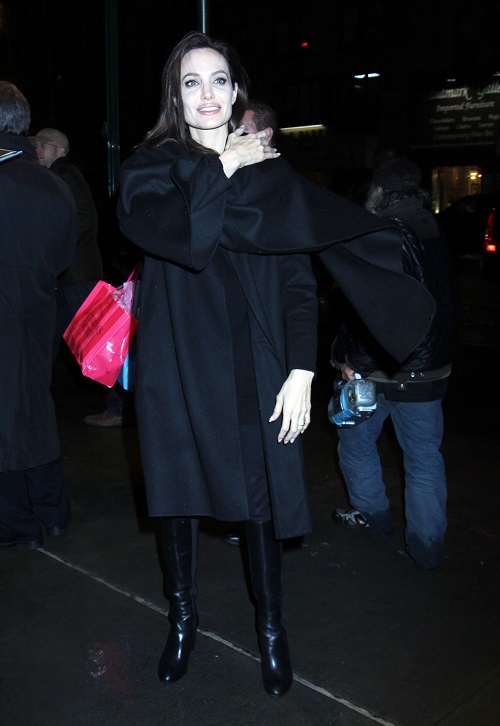 Brad Pitt wants Angelina Jolie to find some female friends, so has Angie decided to take the BFF plunge with fellow A-Lister Nicole Kidman? Angelina Jolie has had a rough couple of months, from a public screaming match to Brad Pitt on a balcony, to numerous cheating scandals, to the SONY hackings that thoroughly embarrassed her and caused some heavy damage to her image. The Unbroken star could totally use a BFF to vent to her about her alleged affairs with her co-stars, or the ongoing rumors that her hubby Brad Pitt is cheating on her. Ironically, Angelina Jolie is never spotted out socializing with any other women, and it is no secret that she doesn’t get along well with too many of her female co-stars.

The January 12th edition of OK! Magazine reveals that we aren’t the only ones who have noticed Angelina Jolie doesn’t have any friends – her husband Brad Pitt has been pressuring her for a while to expand her social circle and find a woman she can relate to and hang out with. According to OK! Magazine’s inside source, “Brad thinks it would be healthy for her to bond with women and set a good example for their daughters. Now she is on a mission to find female confidantes. Her lit of potential pals include Hollywood newcomers like Lupito Nyongo and acquaintances like Nicole Kidman, whom she replaced in Mr. & Mrs. Smith. Angie thanks Nicole for inadvertently helping her meet Brad, so she would love to reconnect.”

Nicole Kidman and Angelina Jolie do have quite a bit in common, they are both big names in Hollywood, are married to equally big named husbands, are raising families, and have adopted children. However, call us crazy – but we don’t see them getting together for brunch anytime soon, because Nicole and Angelina also have something else in common, extreme paranoia and insecurities when it comes to their marriages. There is a reason Nicole and Angie don’t hang out with other women, because they think every other woman on the planet wants to steal their husband.

Could you see Angelina and Nicole Kidman hanging out willingly, not just running in to each other at an event? What star do you think would make a good BFF for Angelina Jolie? Let us know what you think in the comment section below!