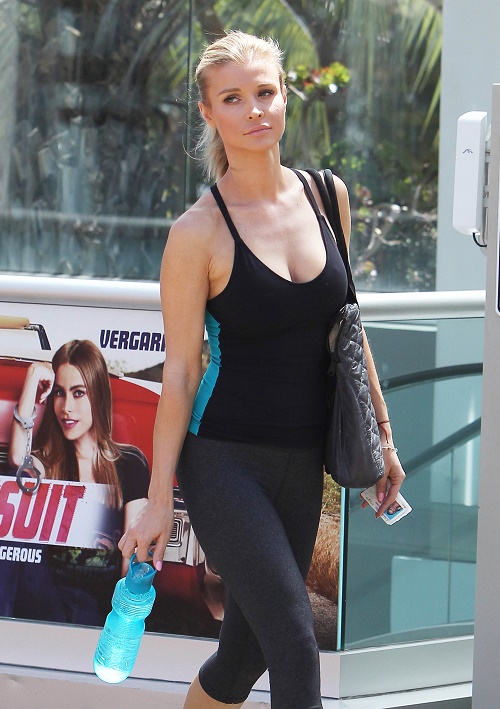 Certain outlets have reported that RHOBH’s star Brandi Glanville, who is currently being sued by former RHOM Joanna Krupa, upped the ante a few nights ago. The rumor being reported by other gossip sites is that Glanville sent a salmon dish to Joanna and Romain Zago’s table at a Los Angeles restaurant – all in an effort to continue a vagina joke made on Bravo’s Watch What Happens Live.

The rumor is false. No fish dish or any other dish was sent to Krupa’s table. In fact, sources at the restaurant and the table deny Glanville’s involvement with anything Joanna Krupa related.

Joanna Krupa, winner of Poland’s Top Model Contest, is best known for her work in men’s magazines like Playboy and Maxim, is currently suing single-mother, and former runway model, Brandi Glanville. The suit was filed in a Florida State Court over comments Glanville made on the after-hours comedy program, “Watch What Happens Live” or “WWHL”, hosted by Bravo executive producer Andy Cohen.

WWHL is an irreverent, bawdy, no holds barred late night comedy series. The SNL type format features a celebrity bartender, drinking games, and shock fests that mock popular culture, and encourages gossip and mocking of other Bravo stars, such as Krupa, who starred in RHOM. It was during the after-hours comedy show that host Andy Cohen related to Glanville that Krupa had been seen wearing a T-Shirt that read, “Team Rimes.” LeAnne Rimes is the ‘90s country singer that had an affair with Glanville’s then-husband Eddie Cibrian. Glanville snapped back that at least her ladybits don’t “stink.” It was a hysterical moment in television, with co-host and actor Mark Consuelos falling to the floor breathlessly laughing.

This week someone called the tabloids, stating that Glanville continued the joke by sending fish to Krupa’s table. It just isn’t so.

Most would opine that Krupa has involved Glanville in what is referred to as a frivolous lawsuit. The intent is to cause financial burden and stress to the sued, with no hope of a favorable judgment. In a true defamation suit, it is the aggrieved who is under stress. Congress and many states have tried to legislate against these actions for decades; many successfully. The suits are considered a bane on the legal system and clog the courts and waste taxpayer’s monies. In this case, the clear intent seems to bankrupt single-mother Glanville, while garnering publicity for Krupa. But what type of publicity? The joke is over a year old and no one would remember it if Krupa would stop giving it life.

Krupa, the daughter of a wealthy international hotelier, is married to nightclub owner Romain Zago, who is listed as being worth $15 million. Krupa clearly doesn’t need whatever money Glanville has managed to save during her three years on housewives. So why the lawsuit? Most would agree it is purely malicious. More would argue it’s frivolous. The even more salacious rumors say Lisa Vanderpump is behind the suit. Others state Krupa is trying to sue herself onto a role on the RHOBH.

The conundrum is that Glanville was an employee of Bravo’s RHOBH, being paid to appear on a secondary Bravo series, “WWHL,” when she delivered the one liner at Bravo producer Cohen’s instigation. So why isn’t Krupa also naming Bravo in her suit? It would seem a real lawsuit would also name the employer as Glanville was being paid to perform by Bravo when the zinger was filmed.

Jurisdiction also adds to the legal aim, namely, Glanville a resident of California, working in NYC, and being sued in a Florida State Court. More fodder for legal eagles to question a possible trial. But simply arguing that the court is improper could easily cost her upwards of $30,000 in legal fees.

Does anyone really believe RHOBH stars Yolanda Foster and Lisa Vanderpump, along with millionaire developer Mohammed Hadid, are going to testify in Krupa’s vagina-gate suit? Frankly, they are not within the jurisdiction necessary to be subpoenaed.

Frankly, the suit is ridiculous. As ridiculous as gossip that Glanville would further fuel a costly litigation matter which she can’t possibly afford.

The public relations angle is mystifying. Krupa is now famous for being a sexy model, if she continues the lawsuit, she will go down in history as the women who sued over a stinky vagina joke. Most women can think of other things they’d wish listed to their Wiki.

Most want erroneous defamatory statements to be hushed, not spread, and certainly not publicized. But didn’t Krupa’s attorney announce the lawsuit on Twitter? This is clearly not a subject that Krupa is uncomfortable discussing in the press. It would seem continuing the conversation is the intent of the lawsuit, which is confounding.

Krupa is still happily married, still modeling, hosting a TV show, and still considered a sex symbol. True, she can claim she has never had vaginitis, vaginosis, and a yeast infection in a Florida Court of Law if she wishes. Although, who can imagine any woman wanting to spend days on the witness stand discussing her entire gynecological history and making it public record. Or worse, having former lovers take the stand. Who would want that on the public record or in TMZ?

I, for one, remain dubious that a sexually active woman who spends a good part of her life in a wet bikini has never experienced routine symptoms that most women have experienced at one time or another. Which is why this writer doesn’t believe the case will ever see a courtroom. But was that ever the intent?

Rumors are that Krupa had already eaten half of Glanville’s savings, savings earmarked to buy a house to raise her sons. Glanville currently rents and receives only a paltry $1000.00 a month in child support in costly Los Angeles. Currently, she is not filming and not receiving a paycheck. In her memoir, she related that she was left destitute with no savings after her divorce in 2010. After landing RHOBH, ex-husband Eddie Cibrian engaged Glanville in costly litigation for back child support – twice.

This leaves this writer with the following questions: who is planting erroneous fish stories in TMZ? Who wants Krupa’s name in the news? Who wants Krupa to look like a victim? Who is financing Krupa’s lawsuit, and how long before Krupa drops the frivolous suit? Will she wait until she completely drains Glanville’s meager finances or drop the suit prior to the point in litigation whereby she must produce her personal medical records possibly proving Glanville’s witty rejoinder might have merit. We wait.