Caitlyn Jenner Reality TV Show: ‘I Am Cait’ Promo Video And Premiere Date – Caitlyn Will Get More Viewers Than The Kardashians? 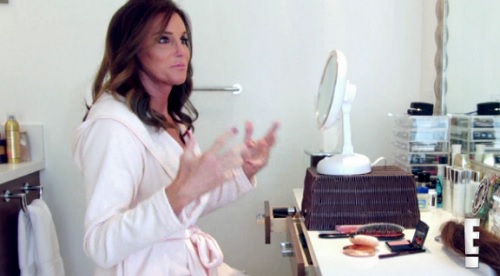 Caitlyn Jenner, formerly known as Bruce Jenner, broke the internet this week with her world debut on the cover of Vanity Fair Magazine. And she is just getting started! Caitlyn scored her own spin-off reality TV series on E! Network titled, “I Am Cait,” and on Wednesday, June 3 the network released the first promo video for the highly anticipated new show following Caitlyn’s journey and transition. According to E!, the docu-series will be eight episodes long – each episode will be one hour.

The “I Am Cait” promo video opens with Caitlyn Jenner sitting in front of a mirror and putting on a make-up. Caitlyn explains, “So many people go through life and they never deal with their own issues. No matter what their issues are, ours happen to be gender identity. But how many people go through life and just waste an entire life because they never deal with themselves, and be who they are?” The promo also features Caitlyn leaving her Malibu home for the first time decked out completely as a woman. She gushes to her friend in the car with her that she is “the new normal.”

Caitlyn Jenner’s transition and Vanity Fair cover have created a media frenzy, and she even managed to overshadow her stepdaughter Kim Kardashian’s pregnancy announcement. The new reality TV show, “I Am Cait,” is set to debut on E! Network on Sunday, July 26 at 9:00 PM – and we can’t wait to see Caitlyn blow Keeping Up With The Kardashians ratings out of the water. It will be hilarious if Caitlyn’s show airs in the KUWTK time-slot and brings in double the amount of viewers as the Kardashians usually do.

What do you think of Caitlyn’s new promo? Will you be tuning into “I Am Cait” on E!? Do you think that Caitlyn’s new show will get better ratings than Keeping Up With The Kardashians? Let us know in the comments below!