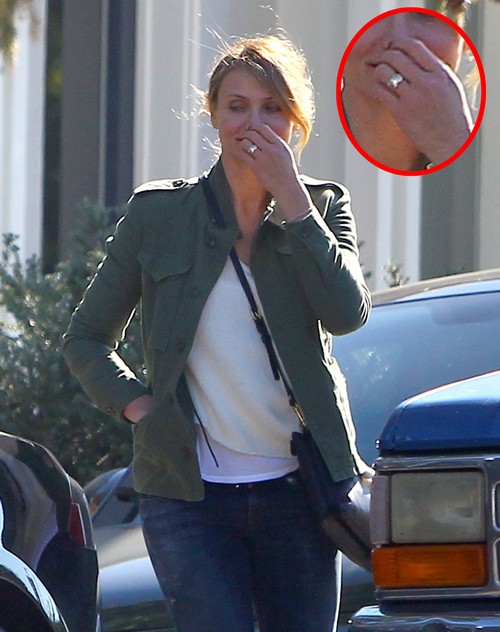 Anyway, Cameron and Benji went all out for their wedding, hosting a star-studded event at their Beverly Hills home, with the reception being held under a tent. Drew Barrymore and Nicole Richie were reportedly bridesmaids, with other celebrity guests including Gwyneth Paltrow, Jeffrey Katzenberg, Robin Antin, Samantha Ronson, and Reese Witherspoon.
People Magazine has already confirmed the news, lest we dismiss this wedding as extravagantly written fan fiction. Cameron and Benji released a statement via People saying, “We couldn’t be happier to begin our new journey together surrounded by our closest family and friends.”

Cameron Diaz and Benji Madden first started dating last Spring, and they were reportedly engaged by December, so again, this is pretty slow for Cameron’s usual standards. Benji reportedly moved into Cameron’s house towards last summer, so I think the only thing Cameron should be scared of is Benji using her for his career. However, they’ve stayed relatively private throughout the duration of their relationship, and neither one of them has shown any famewhoring tendencies. And even though their wedding was extravagant, sources have also described it as ‘intimate’.

What do you guys think about Cameron Diaz and Benji Madden getting married? Do you think that Cameron carefully evaluated the options before jumping into this marriage with Benji, or is she going to end up getting a divorce within the next six months? Let us know your thoughts in the comments below.

Cameron Diaz and rocker Benji Madden’s at Madden’s home in Beverly Hills, California on January 5, 2015. The pair were married inside the Madden home and had the reception in the backyard. Nicole Richie and Drew Barrymore served as bridesmaids. Among the guests were Lionel Richie, Gwyneth Paltrow, Jeffrey Katzenberg and Will Kopelman by FameFlynet