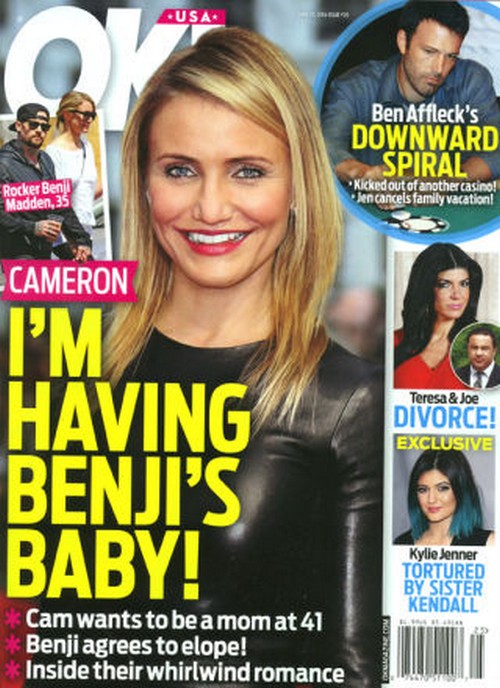 Cameron Diaz and Benji Madden have barely been dating for a few weeks, but the pregnancy rumors have already started making the rounds – any minute they’ll report Cameron with a baby bump. According to the latest cover issue of OK! Magazine, Cameron is set to become a mother for the first time at age 41. Apparently, Cameron and Benji are planning to elope the first chance they get, and I assume they’ll announce this non-existent pregnancy after their elopement?

Seriously, Cameron and Benji literally JUST started dating. Sure, Cameron gets ridiculously attached to her boyfriends very fast, but I doubt she would get so involved that she wants to get married and have children already. I don’t think a few weeks is enough for anybody to make such drastic life-changing decisions, no matter how ‘in love’ they are. Plus, Cameron always moves quickly with her relationships, but quickly for Cameron means hooking up with the dude, spending all their time together, and getting emotionally invested. Never in the past has she expressed an interest in getting pregnant or getting married, and it’s doubtful that she’ll break that for Benji Madden of all guys.

OK! also has a cover story featuring Ben Affleck‘s gambling addiction, which is in full resurgence following his card counting in Las Vegas. Clearly, playing Batman is getting to Ben, and he’s turned to gambling as a way to release his stress. Unfortunately, what started out as Ben dipping his toes in has now turned into a full blown gambling addiction, something that Ben has spent many years getting over in the past. He was reportedly battling a gambling addiction a few years ago, but managed to overcome it and move on. Clearly, that self-control didn’t last, and now he’s putting his career and marriage on the line for a few quick chances at high-roller tables in casinos.

There’s also a featured story on the Jenner sisters, Kylie Jenner and Kendall Jenner. Apparently, Kylie gets ‘tortured’ by sister Kendall, but in that case, why are they so close? Stockholm syndrome, perhaps – I wouldn’t put anything past the Kardashians.